The final section of this brief describes the scenarios presented in the table below. For a downloadable Excel version, click HERE.

The Commonwealth’s Chapter 70 education funding formula aims to ensure that every child in every district can receive an adequate baseline education. The formula factors in the needs of a district’s student population (e.g. directing more resources to support low-income students and English language learners) and the capacity of supporting cities and towns to raise local tax revenue. For more specifics on how the formula works, see Demystifying the Chapter 70 Formula.

For FY 2017, the Governor proposes increasing Chapter 70 aid by $72.1 million over last year (1.6 percent). In many ways, this proposal runs the funding formula in standard ways, using updated enrollment and inflation data, continuing the gradual phase-in of reforms to how local contributions are calculated, and guaranteeing a minimum $20 per-student increase.

In addition, the Governor proposes three significant changes related to low-income students, which are the subject of this brief:

While these changes combine to increase support for low-income students (a statewide foundation budget increase of $55.5 million, or 4.5 percent), this proposal nonetheless generates less Chapter 70 aid for some districts than they otherwise would have received. To address challenges with the new low-income student measure (change #1 above), the state could consider carrying over FY 2016 free and reduced meal percentages as a temporary stopgap while continuing for another year its work to better count low-income students under the new measure. And if the state does use the new measure, we should at least use the most up-to-date data possible.

Independent of which low-income count is used, the state could still move forward with increases to the low-income foundation budget rate for districts with concentrations of low-income students (change #3 above). Further, it could consider implementation of other recommendations made by the Foundation Budget Review Commission.

In this brief we walk through these changes one-by-one, analyze their combined effect for every district, and present a couple of alternative options.

For Chapter 70 enrollment purposes, the state counts low-income students by using the number of kids receiving free and reduced price meals. For a long time, parents enrolled their children in the school meals program by filling out forms at the beginning of each school year demonstrating that their income was below 185 percent of the federal poverty level.

Recognizing that many of these families are already enrolled in other public programs that use similar income criteria (e.g. MassHealth and food stamps/SNAP), the federal government recently simplified this application process by allowing districts to enroll kids directly for free meals if they are already enrolled in one of these other programs (a process called “Direct Certification”). Further, districts that directly certify at least 40 percent of their students for free meals now have the option of providing free meals to all students, regardless of income (called “Community Eligibility”). For more detail, see FAQ: Expanding School Meals and Implications for School Funding Formulas.

While these changes do much to improve the school meals program—increasing the number of kids receiving free meals and reducing administrative work for districts—fewer kids have been enrolled through the new direct certification process than had been enrolled through the traditional income verification forms. These reductions create a problem for the Chapter 70 formula since simply using the new school meal headcounts would lead to large reductions in district foundation budgets that aren’t reflective of real world decreases in the number of low-income kids that they are educating. And the size of this gap varies widely by district, so the problem can’t be solved by making a uniform upwards adjustment to the assumed cost of educating low-income students.

Because there’s no easy way to align these new school meal enrollment numbers with the old numbers, one stopgap option worth considering is applying free and reduced meal percentages used by the FY 2016 budget to FY 2017 enrollment totals. In fact, some Community Eligibility districts, like Boston, have already carried over prior year low-income percentages. Doing this for all districts in FY 2017 would provide a reasonable estimate of total low-income students, since the data is (mostly) just one year old and would buy the state and districts additional time to implement strategies for closing the gap (Direct Certification for School Meals: Feeding Students, Counting Kids, Funding Schools describes some of these potential strategies). Carrying over old percentages would only be a temporary solution, but it might lead to less disruption for FY 2017 than using new school meal counts would.

Rather than carrying over current year’s percentages, the Governor’s FY 2017 budget follows a recommendation from DESE to use the new measure and call it "economically disadvantaged." This new measure identifies many fewer low-income students for three primary reasons:

The Department of Elementary and Secondary Education, in collaboration with districts and community partners, has recognized that the new school meals enrollment process has created transition challenges (along with opportunities) and has been working hard to close the gap described above. In fact, steps like increasing the number of data matching queries to four times per year have already helped reduce the gap considerably.

Despite this progress, the new measure for “economically disadvantaged” students in FY 2017 still captures 18 percent fewer low-income students than does the measure currently used for FY 2016. And there are wide variations in the size of this gap across districts. Below are ten districts with some of the largest declines. None of these districts had large declines in total enrollment. 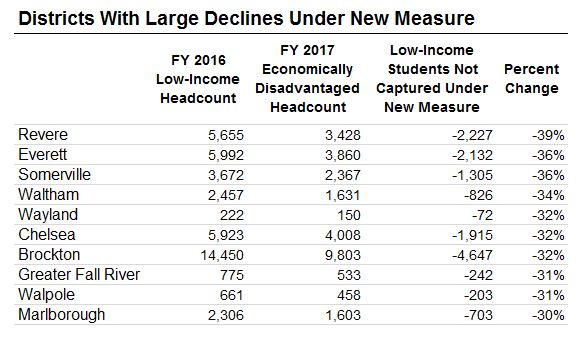 Due to the wide variation in gaps under the old and new methods for enrolling in the federal school meals program, simply swapping in the new estimates would lead to reduced Chapter 70 allocations for many districts. The Governor’s Chapter 70 proposal attempts to account for this reduction by making an upwards adjustment to the low-income rate in the Chapter 70 formula—from an incremental cost of $3,142 in FY 2016 to $3,775 in FY 2017 (see Deciles table below). This 20 percent increase is roughly the size of the statewide decrease in enrollment counts and is intended to serve as an offset. But because actual differences vary widely across districts, this uniform adjustment doesn’t solve the problem for many districts. Until the size of these gaps becomes more uniform across districts, a uniform adjustment will not solve the challenge.

Ultimately, improving the enrollment of eligible families in public programs (e.g. MassHealth and food stamps/SNAP) and improving our data matching systems would serve to help close these gaps. This will also better ensure that the headcounts used by the new “economically disadvantaged” measure accurately reflect the student populations in every district.

In addition to making the uniform adjustment to the low-income foundation budget rate, the Governor proposes increasing this rate for districts with concentrated poverty, following a similar recommendation made by the Foundation Budget Review Commission (read the full report HERE). Since these higher rates apply to all districts uniformly, this proposal does not solve the problem of variable gaps across districts under the old and new school meal enrollment approaches. But taken on its own, this is a proposal for supporting districts with greater proportions of low-income students that is worth consideration. 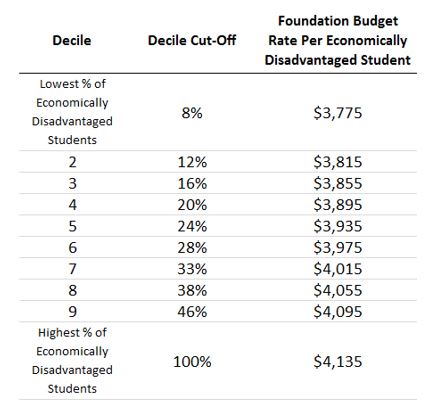 This proposal helps offset foundation budget reductions for districts with the largest gaps between the new economically disadvantaged measure and their current free and reduced price meal headcounts, but it does not fully offset these reductions for many of them. For other districts with smaller gaps between the new and old measures, this proposal helps increase the resources available for supporting low-income students.

The table below shows low-income foundation budgets under the Governor’s proposal compared to what they would have been if instead the Governor had applied last year’s low-income percentages to FY 2017 enrollment totals. For these districts, the two increases to low-income student rates (the base rate increase and increases for concentrations of poverty) are not enough to offset the effect of their reduced low-income headcounts. 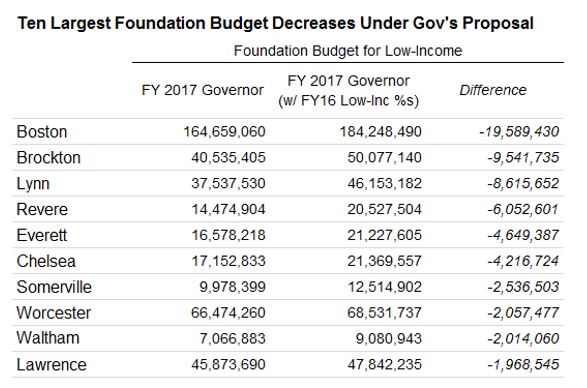 Because of the formula’s hold-harmless provision, lower foundation budgets don’t actually lead to cuts in Chapter 70 aid for any of these districts (and the Governor’s budget guarantees a $20 per student increase). But many of them would see increases in Chapter 70 over the Governor’s proposal if instead the formula used FY 2016 low-income percentages (see the middle column in the table below).

Statewide, the Governor’s Chapter 70 proposal is a modest 1.6 percent above current FY 2016 levels, whereas total state revenue collections are projected to rise 4.3 percent over FY 2016. With this in mind, the Legislature could consider additional changes to the Chapter 70 formula in FY 2017, and still keep the total increase in line with state revenue growth (a 4.3 percent increase to Chapter 70 would total roughly $194 million).

For the purposes of illustration, we present one option in the right-hand side of the table below, increasing the base low-income increment up to the minimum level recommended by the Foundation Budget Review Commission (FBRC). Specifically, the Commission found that low-income funding increments in the Chapter 70 formula are below what is identified as best practice in the academic literature. Therefore, the Commission recommended: “(B)ased on its review of national literature, practices in other states, and model districts within our own state, the Commission offers the guidance that that weighting should fall within the range of 50%-100% and that multiple concurrent interventions are necessary to effectively close achievement gaps. The final decision should provide high poverty school districts with enough funding to pursue several turnaround strategies at once.”

Raising the average low-income increment to 50 percent of the average base rate would increase Chapter 70 aid by $177.6 million (3.9 percent) over FY 2016, a bit less than projected state revenue growth.

Ultimately, the Governor’s proposed low-income changes help increase Chapter 70 aid modestly for many districts in the Commonwealth. The challenge, however, is that the size of these increases varies widely, and some districts actually receive less aid than they would if FY 2016 low-income percentages were used instead of the new economically disadvantaged headcounts. While carrying over old enrollment percentages would only be a temporary solution, it would give the state and districts valuable time to implement strategies (for more on this click HERE) to provide more accurate direct certification numbers by the time FY 2018 budget season comes around.

See below for related Chapter 70 detail for every detail in the Commonwealth, and for a downloadable Excel version click HERE.