New Census Bureau data released today show that the national poverty rate increased for the third year in a row in 2010, rising to 15.1 percent from 14.3 percent in 2009. The poverty rate is now at its highest point since 1993, and the total number of people living in poverty--46.2 million--is the highest number in the 52 years for which the Census Bureau has published poverty estimates. The recent deep recession and weak recovery, which have led to high levels of unemployment and suppressed wages, are certainly a factor in recent poverty rate increases. However, it is worth noting that the poverty rate increased eight times out of ten over the 2000-2010 decade, a phenomenon that likely reflects the uneven distribution of economic gains during the decade and other long-term structural problems (the 2007 rate increase was not statistically significant; however the number of people in poverty grew in that year). 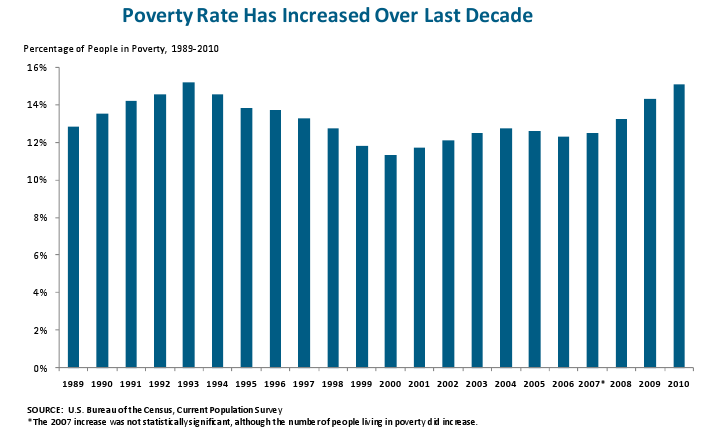 RATE OF DEEP POVERTY AT A RECORD HIGH

The Census data also show that the percentage of people in deep poverty—defined as those with incomes at or below 50 percent of the official poverty level (around $11,000 for a family of four)—rose to the highest point since the Census Bureau began to publish this measure in 1975. The proportion of people in deep poverty in 2010 was 6.7 percent, up from the previous high point of 6.3 percent in 2009. This group represents 44.3 percent of all people in poverty. 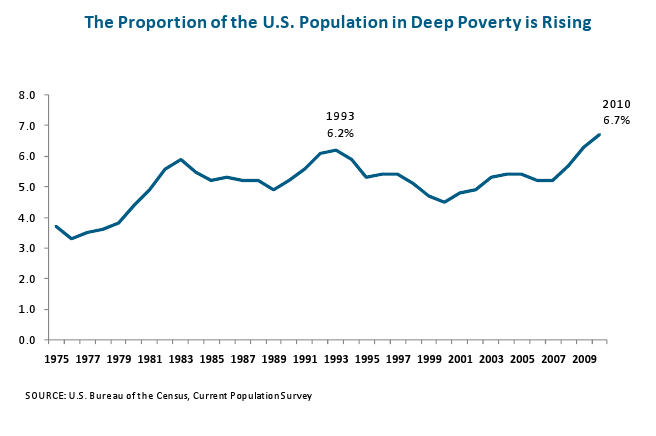 (Reliable state-level estimates are not yet available for all states. On September 22, the Census will release authoritative estimates of state and local poverty for 2010 from the American Community Survey that will provide specific information on Massachusetts and other states.)

GOVERNMENT PROGRAMS AND FEDERAL STIMULUS MEASURES KEEP MILLIONS IN THE U. S. OUT OF POVERTY

In order to measure poverty the Census Bureau looks at the total money income of families, including income from Social Security and Unemployment Insurance (UI) payments, but does not include resources such as Supplemental Nutrition Assistance Program (SNAP, formerly known as the food snap program) benefits or housing subsidies. Income is measured on a pre-tax basis, and thus also does not reflect the effect of taxes paid or of refundable credits, such as the Earned Income Tax Credit (EITC). The Census Bureau publishes an alternative poverty measure using a broader income definition that includes these economic resources. Data for this measure will be published in October, but initial results show some of the effects of these programs:

When considering the role of these federal programs in reducing poverty it is important to keep in mind that the 2010 data reflect not only the ongoing effect of these programs, but also temporary expansions to programs such as SNAP and the EITC that were made under the 2009 American Recovery and Reinvestment Act (ARRA), along with separate extensions of UI benefits. Without these measures, it is likely that many more Americans would have fallen into poverty in during the Great Recession and its aftermath; that could still happen if the temporary expansions expire prematurely.

Even should the US avoid a "double dip" back into recession, robust job and wage growth remain unlikely in the near term. As noted above, the availability of UI benefits kept 3.2 million people out of poverty in 2010. While the longer term solution to growing poverty lies in an array of state and federal policies, particularly those that create jobs with good wages, failure to extend UI benefits—as proposed in the administration's recent jobs legislation—would likely increase poverty again next year.