Documenting Success:
Health Reform in Massachusetts and the Nation 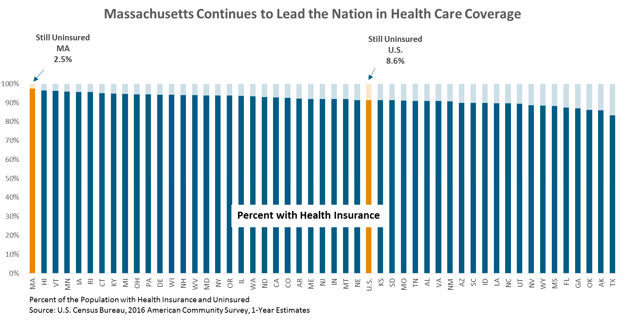 The state’s health insurance coverage rate in 2016 was 97.5 percent, a statistically significant increase from 97.2 percent in 2015. The gap between Massachusetts’ “nearly-universal” health care coverage and fully “universal” health care coverage gets smaller and smaller. In 2016 (the most recent year for which data are available), the U.S. Census Bureau estimates that only 2.5 percent—171,000 people—in Massachusetts did not have health insurance coverage. This rate has been falling over the past several years (see chart).

Health reform at the national level has led to significant increases in health insurance coverage rates across the nation. In fact, close to 17.9 million more people nationally in 2016 have health insurance compared to 2013, before the key provisions of national health reform had started to take effect. In particular, many states that have taken advantage of the federal funding available to expand their Medicaid coverage have seen dramatic increases in health care coverage from 2013 to 2016—by more than nine percentage points in some states (see chart).

Reforms in Massachusetts and nationally have brought greater access to health care for thousands of people across the Commonwealth, and these reforms represent an important financial partnership between the federal and state governments. Federal funding supports a significant share of the costs of health insurance for close to two million people in the Commonwealth. 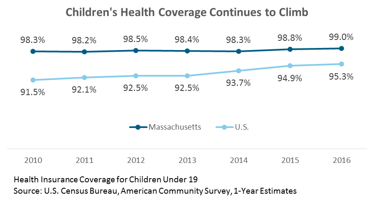 Fortunately, thanks in large part to national health reform, and to funding from such programs as the federal Children’s Health Insurance Program (CHIP), other states are finally catching up to Massachusetts’ impressive health insurance rates for children. Vermont covers 98.5 percent of its children under 19, and Rhode Island covers 97.8 percent.

The data above are from the American Community Survey. The Census Bureau today released 2016 data today from two major surveys that measure health insurance coverage: the Current Population Survey (CPS) and the American Community Survey (ACS). These two surveys measure health insurance coverage in slightly different ways, and can have slightly different results.