The U.S. Census Bureau recently released new data from its American Community Survey (ACS), allowing us to see how Massachusetts residents fared economically last year.1 Although the state has made significant gains in poverty reduction and income growth in recent years, especially since the recession, year-over-year progress began to slow in 2017. Compared to 2016, the poverty rate was essentially flat, and median household income grew at a much slower pace.

Readers may notice that this Census brief does not disaggregate poverty and income data by race or ethnicity. MassBudget recognizes the value in doing so, as our recent report, “Obstacles on the Road to Opportunity: Finding a Way Forward” shows how obstacles to opportunity remain in place and have disproportionately affected communities of color. However, the most recently published Census data do not provide sufficient detail to allow us to describe fully and accurately these disparate impacts, especially because Massachusetts is home to large and diverse Asian, Black, White, Native American, and Hispanic/Latinx populations. We are in the process of analyzing poverty and income data in more detail and will publish these findings in the future.

While Massachusetts has made strong efforts in recent years to improve conditions for low-income people, the new ACS data on poverty show that progress was static in 2017. Just over 1 out of 10 Massachusetts residents live below the poverty line, which is essentially the same as the rate reported in 2016.2 (This differs from the Supplemental Poverty Measure; see further discussion below.) Although there was no marked improvement over the previous year, the Massachusetts poverty rate is 10th-lowest in the country and close to its pre-recession level of 9.9 percent.

The child poverty rate in Massachusetts followed a similar trend to the overall rate, showing no statistically significant difference from the previous year of 13.5 percent.3 This rate is 12th-lowest in the nation, but is still higher than its pre-recession level, which was 12.9 percent.

The stagnation of these poverty rates suggests that the lowest-income Massachusetts residents continue to face economic barriers and a lack of opportunity, making it extremely difficult to achieve their full potential. Massachusetts could continue to expand on public policies that help low-income people make ends meet and promote opportunities for their communities to thrive. For example, housing, food, and transitional assistance programs are existing policies geared towards aiding those in poverty that could be further supported. (Read more about economic barriers and policy solutions in MassBudget’s report, “Obstacles on the Road to Opportunity: Finding a Way Forward.”)

In addition, living below the poverty line can be a large obstacle to overall health. Such economic hardships have greater effects beyond simply reduced access to medical care or prescription drugs. Living in poverty can be associated with lower life expectancy, higher likelihood of developing an infectious disease or a chronic condition, and poorer health outcomes for children. This highlights the importance of policies targeted towards helping low-income individuals and families. For example, expanding the Earned Income Tax Credit (EITC) would directly increase their incomes, which can then improve their access to nutritious foods or prenatal care, paving a clear road towards better health. (Read MassBudget’s brief, “A Credit to Health: The Health Effects of the Earned Income Tax Credit” for more detail and an example of such a policy.)

New data highlight the effectiveness of federal and state policies like robust safety net programs in helping individuals and families that struggle with poverty. The Census Bureau’s Supplemental Poverty Measure (SPM), an alternative to the official measure, provides a more nuanced image of those in poverty and provides more in-depth information about how safety net programs affect low-income communities.

Unlike the official measure4, the SPM accounts for differences in the cost of living among regions; includes a variety of everyday expenses (like clothing, housing and utilities); and factors in various forms of income support that are not included in the standard poverty measure (like SNAP—formerly known as “food stamps”; the Earned Income Tax Credit (EITC); the Child Tax Credit (CTC); and housing supports).

Nationally, these income and work support programs keep millions out of poverty. The cornerstone of our national safety net is Social Security, a program that lifted 27 million people above the poverty line in 2017, including over 17.7 million seniors. (Other beneficiaries of Social Security include survivors of a deceased family member and those with disabilities.) The EITC and CTC combined lift 8.3 million people, including 4.5 million children, above the poverty line. Some of the people kept out of poverty by Social Security might be the same people kept out of poverty by the EITC and CTC (or other programs), and so the combined effect is difficult to quantify. Thus, the effects of different programs are reported separately (see chart below).

Other public support programs also worked to keep many people out of poverty in 2017. For example, housing subsidies lifted over 2.9 million people, SNAP lifted more than 3.4 million people, and Supplemental Security income lifted about 3.2 million people above the poverty line nationally.

While state-level estimates for the impacts of these programs are not yet available for 2017, older data from the Census Bureau’s Current Population Survey (CPS) offer a window into the important role they play here in Massachusetts, particularly for children. From 2009 to 2012, these programs and credits together kept an average of 920,000 people in Massachusetts above the poverty line each year, 200,000 of whom were children. More specifically, 140,000 and 150,000 people in Massachusetts were lifted above the poverty line due to SNAP benefits and the EITC and CTC, respectively.5 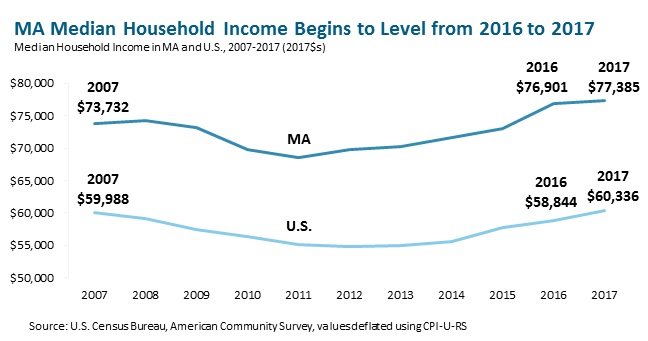 It is also important to note that lack of strong growth at the median does not mean that wages were entirely stagnant. For example, data from the CPS show that Massachusetts workers at the bottom of the earnings ladder saw their wages rise by 6.7% from 2016 to 2017, the third-highest increase in the U.S. over that time. This large increase among the lowest-wage earners suggests that policies like minimum wage increases—the most recent of which took place over that same period—succeed in lifting earnings. The next set of minimum wage increases, which will go to $12 in 2019 and reach $15 in 2023, will give nearly one-quarter of Massachusetts workers a raise. (Our report, “FAQ: The Massachusetts $15 Minimum Wage Proposal” provides more information.)

The slowing of median household income growth, however, continues a pattern of stagnating wages and incomes among the middle. Targeted policies could help to alleviate this problem. For example, Massachusetts could strengthen protections for middle-income salaried workers by raising the threshold above which employers can claim exemption from overtime pay requirements. Increasing the overtime salary threshold would benefit over 260,000 salaried Massachusetts workers, raising the rate of workers who qualify from about seven percent to 25 percent. (For more policies Massachusetts could consider, see our Labor Day brief, “Keeping Massachusetts Working for Workers: Policy Gains in 2018 and Possibilities Beyond.”)

Another possible way to significantly boost earnings is increased investment in quality, affordable higher education. Wage income goes up as educational attainment does, even for those without bachelor’s degrees. Unfortunately, Massachusetts has seen nearly two decades of funding cuts to public higher education, leading to increases in tuition and student debt. Restoring funding to our public universities and community colleges could broaden access and put college degrees and their benefits—including higher earnings—within reach of many more people in the Commonwealth. (For more detail, see MassBudget’s report “Educated and Encumbered: Student Debt Rising with Higher Education Funding Falling in Massachusetts.”)

1 The ACS data used in this report can be found through American FactFinder, the U.S. Census Bureau’s online portal for accessing many of its surveys’ statistics.

2 The overall poverty rate in MA for 2016 was 10.4 percent, but the difference between that rate and 2017’s rate was not statistically significant.

4 For more information on how the official poverty measure is defined, see the appendix section “Measuring Poverty” in MassBudget’s report “From Poverty to Opportunity: The Challenge of Building a Great Society.”