An economy works best when all people can thrive and reach their fullest potential. This includes living without fear of violence and abuse.  In Massachusetts, nearly 1 in 3 women have experienced rape, physical violence, and/or stalking by an intimate partner.1 And these survivors often need to take time off work to deal with legal, medical, and emotional consequences. Yet workers in the Commonwealth are not guaranteed paid time off to deal with these critical issues. Without the right work supports, these experiences of victimization can jeopardize one’s work stability and lead to lost days of paid employment. In fact, women lose 8 million days of paid work a year due to intimate partner violence.2 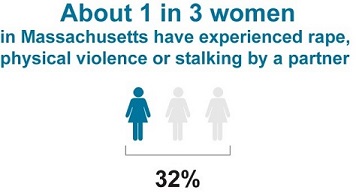 Earned paid sick time laws with safe time provisions have been passed in a growing number of cities and states to provide paid time off for employees to address health and safety issues. About a third of workers do not have access to earned paid sick time in Massachusetts.3

What is safe time and how can it support workers who experience violence or abuse?

Economic security is essential for survivors who are trying to leave an abusive or violent situation. Yet keeping a job can be difficult for survivors because they often need time off to seek critical services, relocate to safe locations, or get legal help.

Safe time provisions can also benefit employers. By creating easier pathways for survivors to get help and by establishing a work environment that increases safety and support to employees, earned paid sick time with safe time provisions can reduce turnover, increase productivity, and lead to more satisfied workers.

What state supports are available to survivors in Massachusetts?

Although domestic and sexual violence usually occurs at home, it often follows the victim to work. Typically, survivors experience an inability to concentrate on the job because of the legal, medical and psychological issues that result from abuse and violence. Because of this, some important laws currently protect survivors in their place of work. Specifically, the Family and Medical Leave Act (FMLA) grants employees unpaid leave from work to address certain health-related issues resulting from domestic violence.  However, the law is limited because it does not grant leave to deal with the consequences of violence beyond critical medical needs.  In order to address this, Massachusetts recently passed a Domestic Violence Act. It requires employers with at least 50 employees to provide workers who are survivors of domestic or sexual violence up to 15 days of leave in any 12 month period.4 This law is also limited, however, because leave is not paid. Risking financial stability can worsen an abusive situation. In fact, economic independence is one of the best predictors of whether a victim can separate from their abuser.5

2Department of Health and Human Services, Centers on Disease Control and Prevention (2003) Costs of Intimate Partner Violence Against Women in the United States: 19  http://www.cdc.gov/violenceprevention/pdf/ipvbook-a.pdf