February 2015 Note: After the initial publication of this preview the House, Senate, and Administration agreed on an official estimate of tax revenue for FY 2016 that assumes $1.172 billion in new revenue. This estimate is higher than the estimate in this preview and would reduce the projected preliminary gap. It is important to note that all estimates are subject to changes that could increase or decrease the preliminary gap.

At its best, our state government can play an important role in making life better in Massachusetts: expanding opportunity with great schools and affordable higher education; improving the quality of life in our communities; and giving all of our families the security of knowing there is a safety net if we face severe misfortune.

Since 2001, our state's ability to meet those goals has been severely restrained. After cutting state income taxes by over three billion dollars during the dot-com bubble, the state was forced to make deep cuts when that bubble burst, and again in the most recent recession. 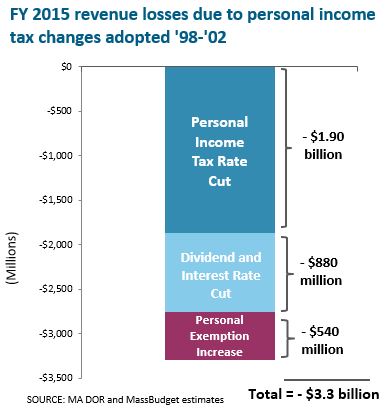 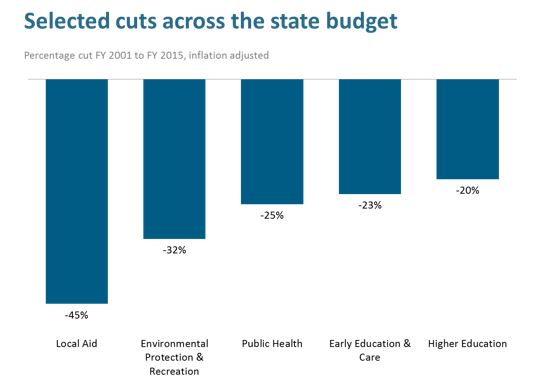 During good times the state has barely been able to balance the budget, and when the economy is weak we have seen deep budget cuts. The recent national recession was the worst since the Great Depression and the recovery, though getting stronger by most measures, has not yet created a robust economy with rising wages for most workers.

As the FY 2016 budget process begins MassBudget estimates that the state faces a preliminary budget gap of $1.096 billion. This is significantly less than the budget gaps faced during the recent recession, but will make for a very challenging budget process. This is the gap between the cost of maintaining current services and the ongoing revenue expected to be available.

Two sets of factors contribute to the preliminary gap for next year: the gap between current year costs and expected ongoing revenue this year and the projected gap between cost growth and revenue growth next year. The projected gap next year is due mostly to the reliance on temporary revenue to balance this year's budget and costs that were not budgeted for accurately.

When this year's budget was enacted it relied on $352 million in temporary revenue. This includes money from the rainy day fund, gaming licenses, a tax amnesty, and the delay of a corporate tax break. For more detail on temporary revenue used in the FY 2015 budget, please see the Revenue section of Analyzing the State Budget for FY 2015.

There were also a number of accounts that were underfunded. Most significantly, the Group Insurance Commission, which provides health insurance for state employees was funded at least $120 million below likely costs. Following a long term pattern, the budget also underfunded a number of other accounts including those for snow and ice removal and constitutionally required council for criminal defendants. Together these underfunded accounts will likely require at least $250 million. It is also likely that some accounts received more funding than will be spent this year. That will help to cover these costs in FY 2015, but the higher FY 2015 spending levels will still need to be accounted for when planning the FY 2016 budget.

The state has also used cash management strategies in the Medicaid program that involve paying some current year costs in the next year. This creates a temporary savings in the current year by artificially reducing the amount the state needs to pay for the program in that year's budget. While the FY2015 budget pays for some FY2014 costs, it also shifts more costs into FY2016. The net effect of these shifts is that the FY2015 budget will likely pay for about $100 million less in costs (after accounting for federal reimbursements) than will be incurred. This is a temporary savings. There have also been estimates that Medicaid spending is exceeding budget levels by as much as $300 million. There are not official sources that confirm or rebut those projections. Public release of administrative estimates at regular intervals throughout the year would help improve estimates of budget needs going forward (see Opening the Process: Releasing Maintenance Budgets to the Public). For purposes of this preview we assume a deficit in the Medicaid accounts of $100 million (after accounting for federal reimbursements).

In addition to these issues, in November the administration identified a FY2015 shortfall of $329 million. This was due to an automatic income tax cut that was triggered, fees and reimbursements not achieving the levels forecast in the budget, and costs related to an economic development bill enacted earlier this year (for more detail click HERE). Through his 9C authority to implement budget cuts unilaterally when the budget is out of balance, Governor Patrick addressed all but $70 million of this gap. Thus this preview counts only that $70 million in calculating the current year gap.

Together these factors add up to $872 million in ongoing costs that are being paid for with temporary revenue or for which a revenue source has not been identified. This does not mean that there is a current gap of that amount in FY2015. The budget has authorized temporary funding sources to cover a significant portion of these costs. But as we look to next year’s budget, this gap between ongoing costs and ongoing revenue is a starting point for calculating the preliminary budget gap for FY 2016.

Taxes are the major source of revenue for the state budget. The Massachusetts Department of Revenue (DOR) currently estimates that FY 2015 tax revenues will total $24.312 billion. This estimate assumes baseline growth of 4.2 percent over FY 2014 tax revenues and includes the estimated impacts of various tax law changes that have taken effect since the original FY 2015 Consensus Revenue Estimate was released in December of 2014, including a reduction in the tax rate applied to personal income (PIT) from 5.20 percent to 5.15 percent and the repeal of gas tax indexing.

If we assume that revenue growth will continue at 4.2 percent in FY 2016, we can expect an additional $1.021 billion dollars in taxes for the FY 2016 budget beyond that currently anticipated in FY 2015. This growth total, however, must be adjusted downward by $116 million based on estimates from DOR regarding the FY 2016 impacts of various tax law changes. After these adjustments are made, anticipated additional tax revenue that will be available for use in the FY 2016 budget (beyond what is available in FY 2015) will total some $905 million. The two large incremental reductions to the FY 2016 total are the following:

There were also some tax breaks in FY 2015 not scheduled to occur in FY 2016 and whose costs are subtracted from the baseline for FY 2016 (e.g. $26 million from the sales tax holiday).

Federal Revenue is the next largest funding source for the state budget. For the most part this revenue is roughly stable, except for in the state Medicaid program. With the implementation of the Affordable Care Act there have been significant increases in federal funding of our state Medicaid program. The federal government also reimburses the state for 50 percent of most Medicaid costs. Thus, when Medicaid costs increase the state receives increased reimbursements from the federal government. To simplify the accounting in this preview we net off the new federal revenue when projecting Medicaid costs rather than counting this revenue separately. For example, if Medicaid spending increases $200 million we would count only the state share of that cost: $100 million (rather than counting $200 million in new costs and an offsetting $100 million in new federal revenue).

Other revenue (e.g. fees and lottery)

There are other, smaller, state revenue sources such as fees and the profits of the state lottery. These tend to be stable or grow slowly. We project $50 million growth in FY2016.

The best way to project overall cost growth is to construct what is known as a “current services” or “maintenance” budget. To do that requires projecting caseloads and costs for each part of state government (see Opening the Process: Releasing Maintenance Budgets to the Public). Many states publish such estimates. It would allow for a more transparent budget process if Massachusetts were to do so. In the absence of such detailed estimates, this preview provides specific estimates for Medicaid which is the largest item in the state budget, and pensions where the FY 2016 cost is dictated by state law.

Two major factors affect Medicaid cost growth: enrollment growth and health care cost growth. For this preview we assume that together these factors will lead to about 7 percent overall growth in FY 2016, roughly in line with the trend over the past five years. This would result in a gross increase of $1.06 billion and a net state cost of $532 million.

When the stock market crashed at the beginning of the recent recession, there were significant losses in the state pension fund. As a result the state has had to make increased contributions to fund our unfunded pension obligations. The new costs in FY 2016 for the state’s unfunded pension liabilities will be $179 million. Over the long term pension costs have been a relatively small and stable cost for the state. In FY 2016 these costs will be about 4.8 percent of the state budget. A decade ago pension costs were about 4.5 percent of the budget. Because of the way public pensions are structured in Massachusetts – with current employees paying most of the costs of their pensions and the state being exempt from social security – the state actually pays less to fund the pensions of current employees than do most private employers who have to pay into social security. For more detail, see Demystifying the State Pension System.

Throughout the rest of the state budget costs for maintaining current services will rise or fall by different amounts. As the economy recovers and fewer people need to rely on safety net programs, costs for some of those programs may decline. In other areas where there have been efforts to strengthen services, such as at the Department of Children and Families, there will likely be new costs as partial year costs are annualized. For this preview we project average cost growth outside of health care and pensions at 2 percent, about the expected rate of inflation. This would be $468 million.

Overall we project that costs will grow marginally more than revenue between FY 2015 and FY 2016, primarily due to health care cost growth and the cost of tax cuts being phased in. This will add $224 million to the $872 million in FY2015 costs not funded by ongoing revenue, leading to a preliminary FY 2016 budget gap of $1.096 billion. There are a number of large moving pieces that could lead to this number growing or shrinking substantially: most notably tax revenue growth and health care costs.

Like virtually every year since cutting the income tax by $3 billion during the dotcom bubble of the late 1990s, Massachusetts will again be facing difficult fiscal challenges this year and in the years ahead. In 2013 there was a serious debate about addressing these long term problems and making meaningful investments in education and our transportation infrastructure with a progressive tax package. That proposal was largely rejected and the state has instead continued to use temporary revenue sources to keep the budget balanced. Our state has not been able to restore funding for local aid, early education, public health, and many other services that have been cut severely over the past decade and a half.  Instead we have seen a pattern of trying to get by from year to year with a combination of smart and effective reforms mixed with short-term solutions and potentially harmful budget cuts. 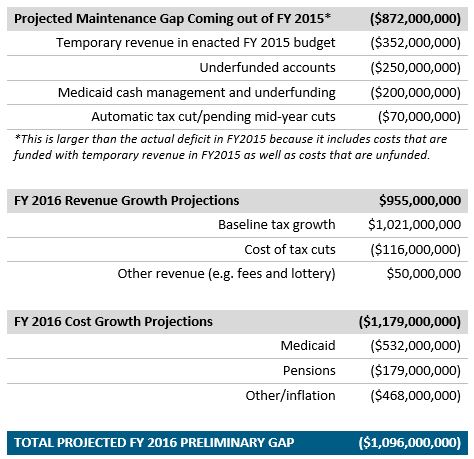