Family and Medical Leave in Massachusetts:
A Current Snapshot


Randy Albelda is Professor of Economics and Senior Research Fellow at the Center for Social Policy at the University of Massachusetts Boston.

Alan Clayton-Matthews is Associate Professor in the School of Policy Studies and Urban Affairs, and the Department of Economics, at Northeastern University.


Massachusetts is better when all working people can balance work, family, and life’s challenges. Yet many workplace and government policies have not kept up with the realities of today’s working families. Most mothers now work outside the home, and with an aging population, more workers need time off to care for an elderly parent or grandparent. Family and medical leave policies allow workers to take time off of work to attend to a serious health condition, have a baby, bond with a newborn or adopted child, and take care of a seriously ill relative. These policies can provide workers with more flexibility in balancing work and family.

This brief looks at the kinds of leaves Massachusetts working families are able to take and the obstacles they face due to the lack of a comprehensive paid family medical leave program. Because of a recent nation-wide survey of employees conducted under the auspices of the U.S. Department of Labor (DOL) in 2012, we know a good bit about who needs and takes family and medical leaves. Using that survey, we  developed the Albelda & Clayton-Matthews/Institute for Women’s Policy Research (ACM/IWPR) paid family and medical leave simulation model that estimates current family and medical leave usage, length of leaves, and if those leaves had any employer wage replacement.1

The simulation model uses the information from the extensive national survey on leave taking to estimate the probability of taking and needing to take a leave based on a host of worker characteristics. These probabilities are then applied to data on all employees in Massachusetts from the American Community Survey (2009-2013).

Currently in Massachusetts, several policies make specific provisions for family and medical leaves. Two of these, the federal Family and Medical Leave Act (FMLA) and the Massachusetts Maternity Leave Act (which was amended in 2015 to include fathers and renamed the Parental Leave Act -- PLA), allow certain workers to take job protected leave for several months (12 weeks in the case of the federal FMLA and 8 weeks in the PLA). But not all workers are covered and it is not paid. The recently enacted Earned Sick Time law allows for paid time off, but only up to 40 hours a year, typically not enough time for anyone taking a leave for a serious health condition, having a child, or bonding with a new child.

While current policies make it possible for employees to take unpaid family and medical leave in certain circumstances, many employees can’t afford to take unpaid leave or can’t afford to take the total length of leave that they need. Beyond the Earned Sick Time law of 40 hours, employers are not legally required to provide workers with paid time off when out of work for family or medical leave. And unlike several other states, Massachusetts has no state insurance-style system that can provide wage replacement to people who need to take family and medical leave. Most often, workers with paid vacation and sick time benefits are able to use those for at least some portion of their time out of work. But serious medical conditions, having a baby, and caring for loved ones are not vacations!

A small percentage of employers provide paid family leave (13 percent in New England), which lets workers address the birth of a child or to care for a seriously ill family member.2 Moreover, 39 percent of employees in New England indicate they have access through employers to short-term disability insurance policies they can use to address serious illnesses, pregnancy, or non-work related injuries.3 Both workers and employers benefit from paid leave. Recent research finds health improvements for new mothers and babies when parents are able to take longer leaves under statewide programs.4 Further, worker turnover is reduced with paid leave.5

The simulator estimates about 413,000 Massachusetts workers currently take a medical or family leave annually, representing 12.1 percent of the 3.4 million workers employed. Of those, based on the national survey, we estimate about one-quarter (95,000) employees take shorter leaves than they need. There are an additional 112,000 workers that need a leave but do not take it. The national survey indicates the most commonly cited reason why is because workers could not afford it (46 percent). Fear of losing a job was the second most commonly cited reason (17 percent).6 Because some workers take more than one leave a year, there were 568,500 leaves taken.

All kinds of workers take leaves. Compared to their representation in the labor force, there is very little difference in the percentage of workers that take leave by race and ethnicity and by education level. Even though the labor force in Massachusetts is split evenly among men and women, 56 percent of all leave takers were women. Further, workers under 24 years of age, workers making $15 an hour or less, and workers in small businesses (firms that employ less than 50 workers) are less likely to take a leave.

The simulation model does not estimate the kind of pay an employee currently receives on leave (e.g. vacation time, family leave, disability insurance), only if some form of wage replacement was provided, usually through an employer. Because most leaves are short and most employees have some access to paid sick time, the majority—72 percent—have some form of wage-replacement. However, a much smaller percentage (55 percent) has full-wage replacement from an employer. And of the 18 percent that indicate they get partial wage replacement, on average that covers about half of their salary. The DOL survey indicates that many workers stitch together a variety of paid time off options, but rely heavily on vacation time.

What types of leave do workers take?

There are several types of family or medical leaves workers can take. We put them into four categories depicted in the figure below. The first and most common type of leave is for own health issues, not related to pregnancy. This includes any serious health condition that a worker has that requires certified medical attention. The flu would typically not fall under this category, for example, but cancer or a hip replacement would. Three out of every five leaves are for own-health reasons. The second most common type of leave is for pregnancy related own-health reasons, which account for 7 percent of all leaves. This type of leave also requires medical certification and typically occurs a few weeks before delivery and several weeks after a birth. The other two types of leaves are family leaves. One is for a parent to bond with a new born or newly adopted child in the home, accounting for almost 8 percent of all current leaves. Finally, one out of four leaves is to care for an ill child, spouse, or parent that has a serious health condition that is medically certified. 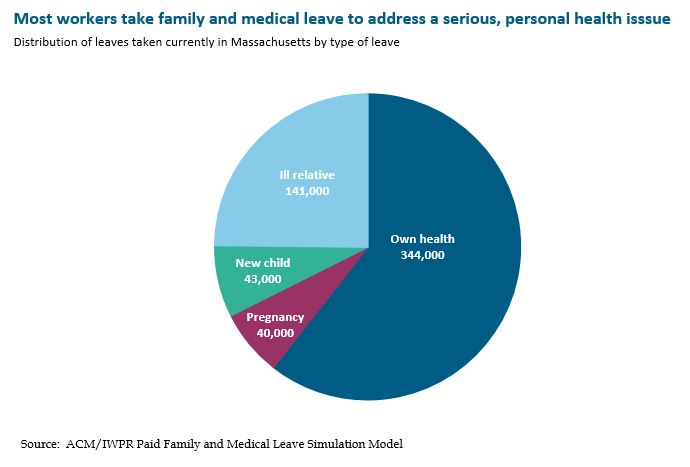 What is the length of leaves?

Most family and medical leaves are relatively short: 25 percent are for one week or less. Still, 50 percent of leaves are for 3 weeks or longer. The average length of leave is 6.6 weeks, but these lengths vary considerably by type of leave. Pregnancy-related leaves are the longest, averaging 12.6 weeks, followed by other own-health leaves at 7.1 weeks. New child leaves average 5.4 weeks, while leaves for ill relatives average 4 weeks.

Workers already take family and medical leaves – 12.1 percent of the labor force. But many can’t take the length of leave they need and over 100,000 don’t take family or medical leave because they are afraid of losing their job or can’t afford to take unpaid leave. A paid leave program closes a large gap in our current family and medical leave policies. It shares the costs among all workers and employers. At some point, almost every worker will confront a serious medical condition of their own, that of a relative, or the joy of welcoming a new child in his or her home. This is the routine nature of our lives. Paid leave recognizes this fact and provides for wage “insurance” for those times. It will also serve to allow all employers an affordable way to provide paid leave and reduce the wage penalty for workers that take leaves for their own health, to have a child, or to care for ill relatives.7 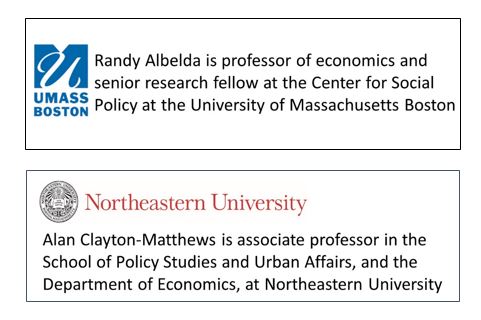 Randy Albelda and Alan Clayton-Matthews are co-authors of the report, It’s About Time: Costs and Coverage of Paid Family and Medical Leave in Massachusetts, produced by the Center from Women and Politics and Public Policy and the Center for Social Policy at the McCormack Graduate School at University of Massachusetts Boston.

1Simulation model documentation can be found at http://scholarworks.umb.edu/econ_faculty_pubs/41/.