In a well-functioning economy, people who work full time should be able to earn enough to support themselves and their families. That’s important for families and for the overall economy, which relies on consumer spending to keep local businesses thriving. Unfortunately, the pattern of economic growth between the end of the Second World War and the 1970s – where wages generally grew at the same pace as economic productivity – has changed in recent decades. Since the 1970s, the value of wages for most workers has been stagnant while the benefits of economic growth have gone disproportionately to the highest income households.1 In recent years, minimum wage increases have begun to restore modest wage growth for lower wage workers.2 A number of states have now adopted laws to create a $15 minimum wage to spread these gains more widely. This brief discusses commonly asked questions surrounding a $15 minimum wage in Massachusetts.

Who would be affected by a minimum wage increase to $15 in Massachusetts?

Projections show that increasing the minimum wage from its current $11 level by $1 an hour until $15 in 2022 would raise the wages of about 943,000 workers or 29 percent of the workforce statewide. Of these affected workers, 90 percent are adults (20 years old and older), 56 percent are women, and 55 percent work full-time. Additionally, one quarter of all working parents would see a raise. And about 367,000 kids statewide (or 26 percent of all Massachusetts children) have at least one working parent that would get a raise.

Increasing the minimum wage to $15 an hour would raise the earnings of significant shares of workers from both low- and middle-income families. Minimum wage increases affect workers both directly, when the new minimum is higher than workers’ current wage, and indirectly, when workers’ wages at the time of the increase are a little above the new minimum and are pushed up by spillover or “ripple” effects as a result of employers maintaining some progression in their internal pay scales.3 Sixty percent of workers with family incomes below $15,000 would get a raise (46 percent directly and 14 percent indirectly) as would 36 percent of workers with family incomes between $50,000 and $75,000 (28 percent directly and 12 percent indirectly). For example, there are many two-parent families with incomes between $50,000 and $75,000, where one parent is making at or about the minimum wage and the other is making a little bit more.

Narrowing to just those workers would who benefit (directly and indirectly) from a minimum wage increase to $15 by 2022, the effects still reach a broad array of workers of different races and ethnicities. For instance, of those minimum wage workers that would benefit from an increase to $15, 18 percent are Hispanic/Latinx, 11 percent are Black/African American workers, and 65 percent are White. 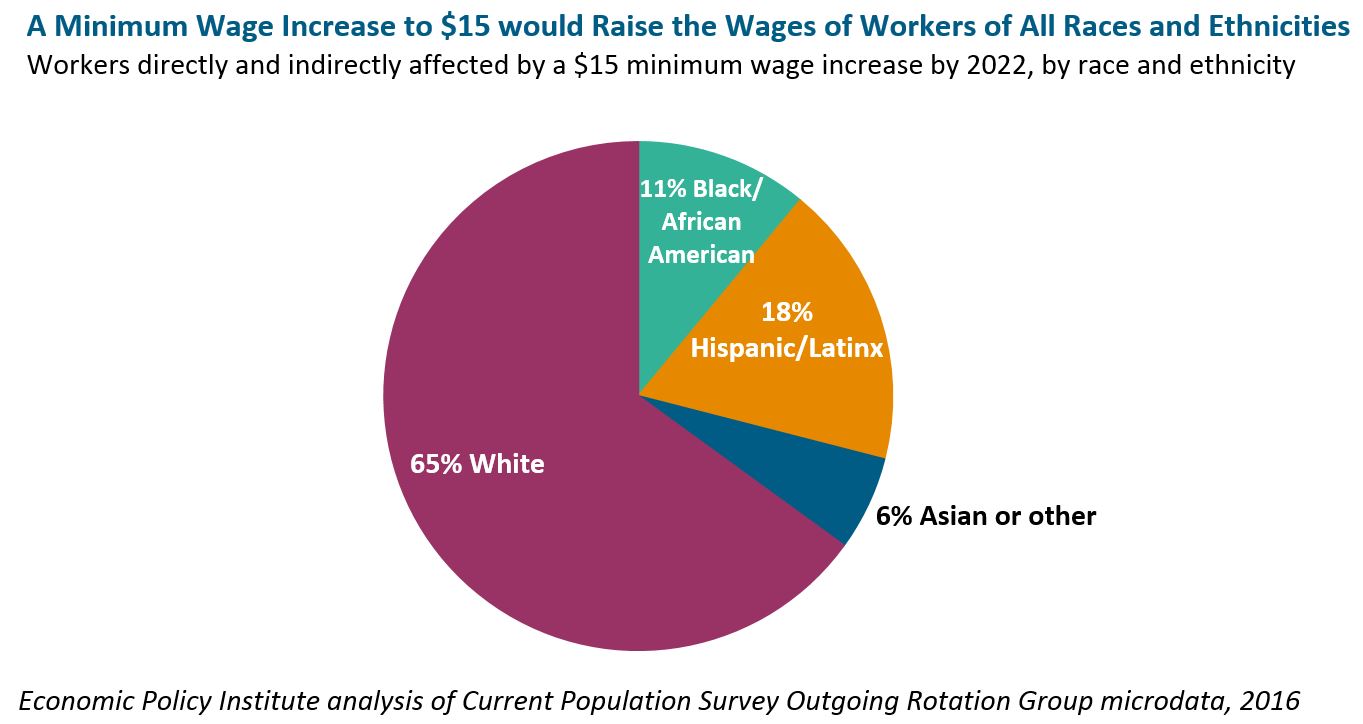 How much more would workers earn?

What places have enacted a $15 minimum wage?

A number of states and localities recently approved minimum wages up to $15 an hour to be phased in over the next few years, including California, New York, and Washington D.C. Also, 27 cities and counties have enacted changes to increase their minimum wages to $15 over time.4 In Massachusetts, Governor Baker negotiated a $15 minimum wage for Medicaid-funded home care workers in 2015. Also, hospitals like Beth Israel Deaconess Medical Center, Boston Medical Center, and Tufts Medical Center have also agreed to a $15 wage floor. 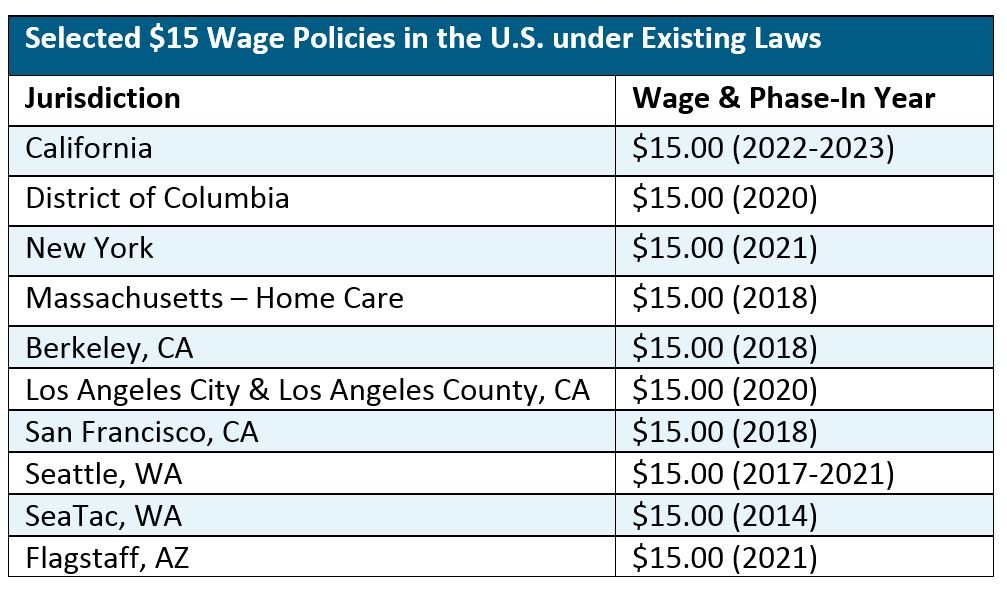 What is the minimum wage now and how has it grown in relation to productivity growth over time?

Massachusetts’ minimum wage is $11 an hour. The minimum wage increase to $11 an hour occurred in three annual steps of one dollar each, starting in 2015 and going through 2017. The wage is not indexed to inflation and is not set to increase further at this time.

While the recent minimum wage increases have restored modest wage growth for lower-wage workers, over the past few decades wage growth has been stagnant for most low- and middle-income workers.5 But there have been times when economic growth led to strong wage growth for most workers. From the end of World War II through the 1970s, increasing productivity – a measure of how much economic output is produced on average in each hour of work - led to rising compensation for most workers, as shown below. This served to raise the living standards for millions of working households, building the middle class. Since the mid-1970s, however, while productivity continued to grow, wage growth for most workers slowed considerably, creating an economy that has not been working as well for many working families. In fact, between 1973 and 2016, productivity grew 73.7 percent, about six times faster than hourly compensation at 12.3 percent. 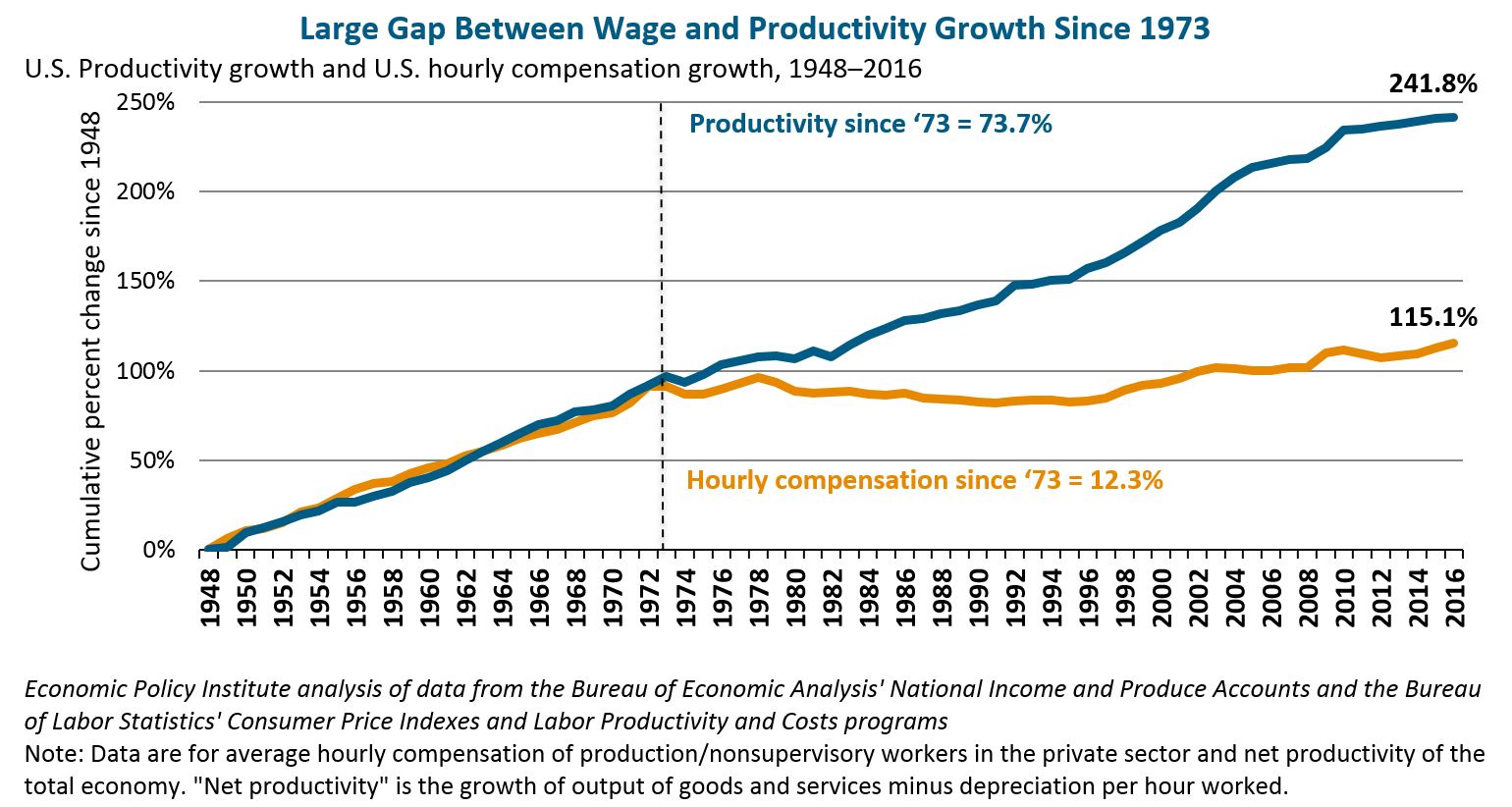 If the minimum wage had grown with productivity since 1979, it would be $18.33 today. Providing an even more striking contrast is growth in average CEO compensation, which has skyrocketed over recent decades. The state minimum wage would be $92.30 an hour, if it had grown at the same rate as CEO pay since 1979. While that comparison highlights how unbalanced income growth has been in recent decades, it does not provide a useful benchmark for the minimum wage. Productivity growth, however, does: over the long term, it is reasonable for wages to grow with productivity because as the economy becomes more efficient, wages can grow too, reflecting overall economic growth.

How has the recent minimum wage increase from $8 an hour to $11 an hour affected low-wage workers wages so far?

Massachusetts took a modest but important step toward restoring wage growth for low wage workers by increasing the minimum wage from $8 an hour in 2014 to $11 an hour in 2017. Based on most recent estimates, when the minimum wage rose in the state from $8 to $10 an hour between 2014 and 2016, wages grew significantly for workers in the bottom 10th percentile, an 8.4 percent increase.6

How does the minimum wage apply to tipped workers, and how have their wages changed over time? 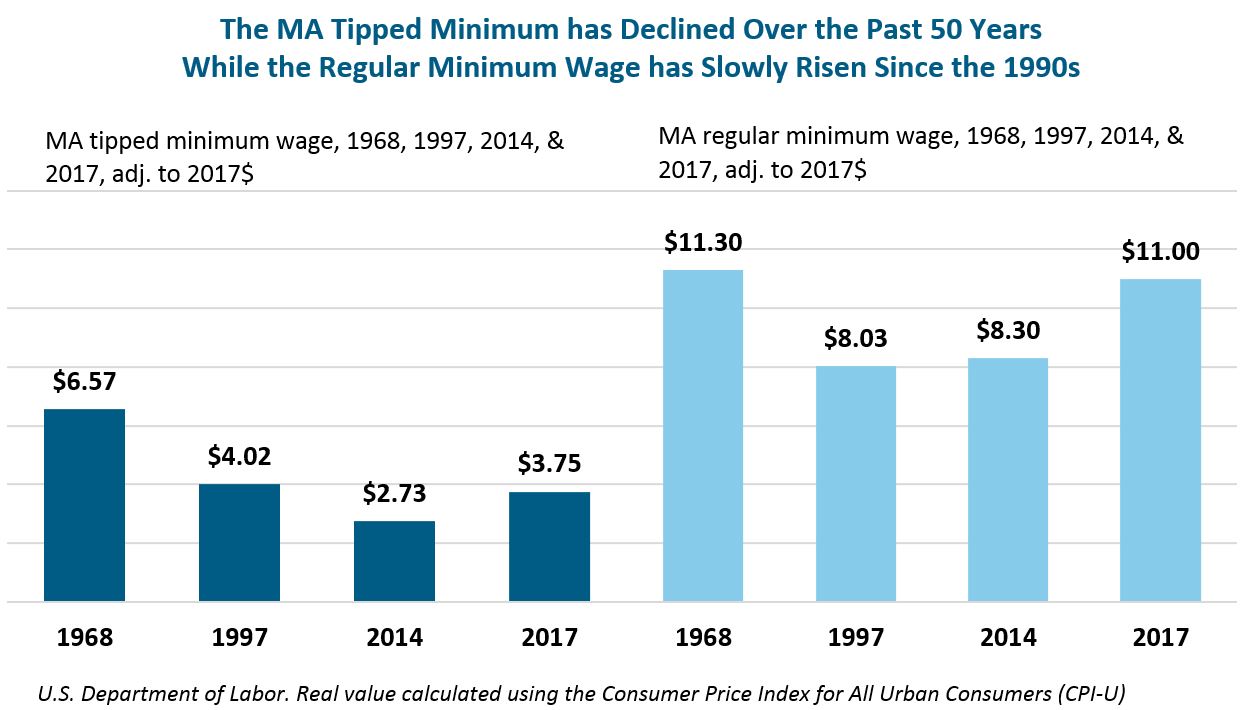 How would tipped workers be affected by the $15 minimum wage proposal?

Tipped Wage Violations
As mentioned in the previous section, Massachusetts employers are only required to pay workers who regularly earn tips $3.75 an hour as long as their tips fill the gap between that and the minimum wage. However, there is evidence that they do not always do this. For instance, in 2015 and 2016, the Massachusetts Attorney General ordered that nearly 400 workers, mostly in restaurants, be paid nearly $600,000 in restitution by employers responsible for tipped wage violations.8 Wage violations are typically underreported.9

Sexual Harassment
Eliminating the gap between tipped wages and the minimum wage over time may also reduce the high rates of sexual harassment among low-wage tipped workers. Low wages and dependence on tips as the majority of take-home income can create a culture where tipped workers must tolerate inappropriate behavior at work. In fact, almost 37 percent of all sexual harassment claims by women to the Equal Employment Opportunity Commission (EEOC) come from the restaurant industry.10 Further, in a recent survey of over 500 Boston area tipped workers, 35 percent reported that they have been sexually harassed by customers, more than twice the rate of non-tipped workers in that survey.11 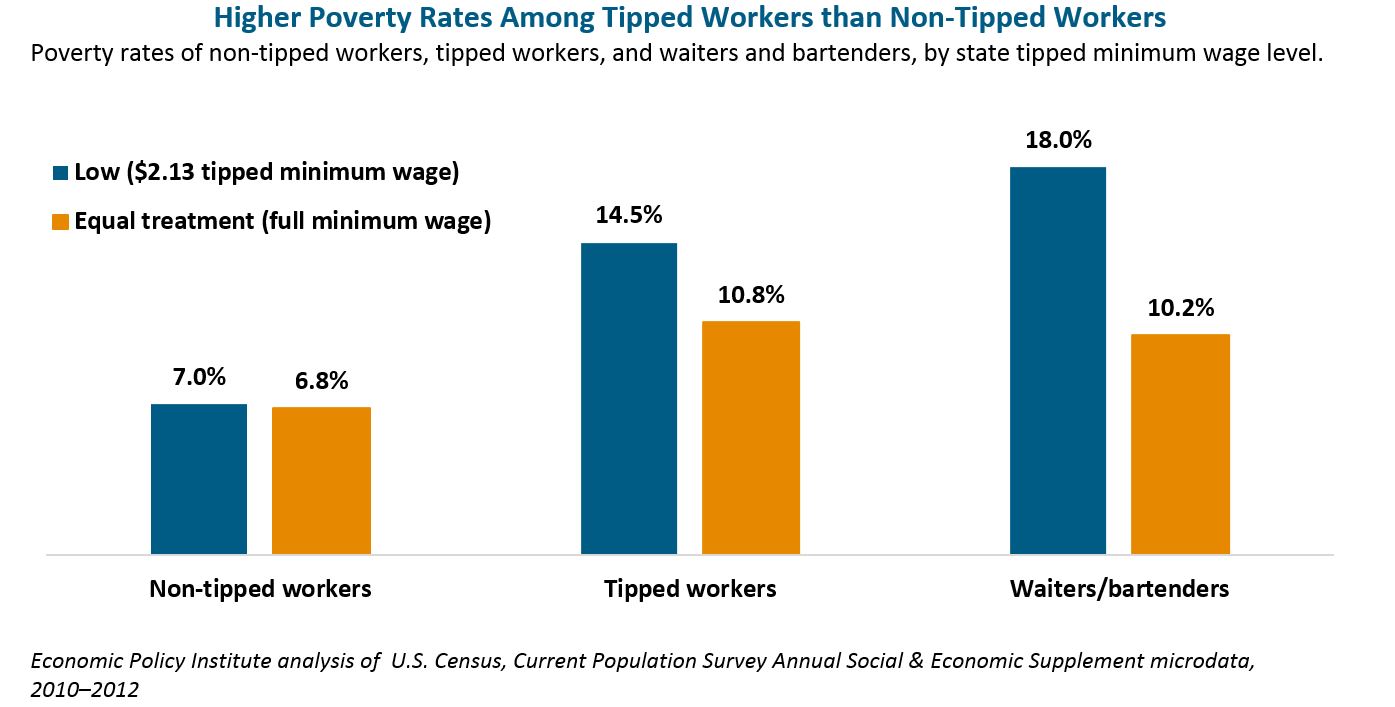 3 In this FAQ, estimates of workers affected by a minimum wage increase to $15 in Massachusetts include both directly and indirectly affected workers, unless otherwise noted. Labor economists have examined the issue of indirect wage effects of raising the minimum wage. For instance, Wicks-Lim finds that indirect effects typically result in wage increases for workers further up the wage ladder because employers want to maintain some progression in their internal pay scales. Also, Dube, Giuliano, and Leonard similarly find positive indirect wage effects for workers earning 15 percent above newly implemented minimum wages. The data on affected workers in this report comes from the Economic Policy Institute, and reflects the research of Wicks-Lim, Dube, et al. For further detail, see the methodological appendix in the Economic Policy Institute 2017 report “Raising the minimum wage to $15 by 2024 would lift wages for 41 million American workers."

7 MassBudget. (2014). The Steep Decline in the Employer Share of Tipped Workers’ Wages.