How Has the Level of Taxes in Massachusetts Changed Compared to Other States? 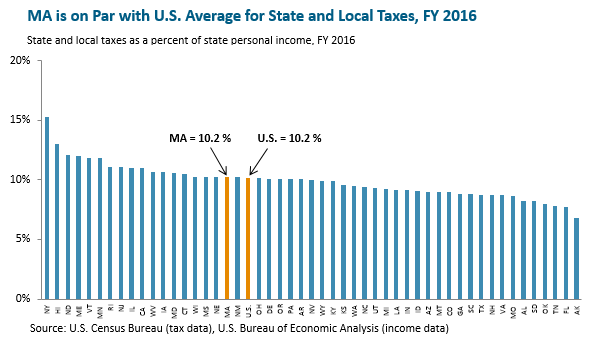 Beginning in the late 1970s, voters and elected officials chose to cut taxes in the Commonwealth multiple times. The approval of Proposition 2 1/2 in 1980 reduced property taxes (a tax levied at the local level in Massachusetts) and then, particularly in the late 1990s, the Commonwealth significantly reduced state taxes—primarily the income tax.2 As a result, between 1977 and 2016, Massachusetts reduced taxes more than all but two other states, as the following figure shows: 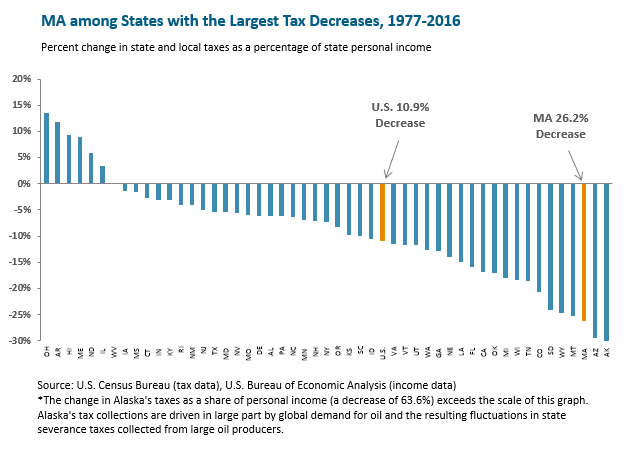 In terms of tax levels, Massachusetts is an average state, with levels below many other states in the Northeast. This is the result of a decades-long trend of state and local tax cuts in the Commonwealth. Not surprisingly, these tax cuts played a major role in reducing the revenue available to fund state and local government budgets, limiting our collective ability to invest in a range of public programs and services, including education, transportation and more.

1See MassBudget, “Facts At a Glance: MA Taxes on Par with U.S. Average in FY 2016”, available at: http://massbudget.org/report_window.php?loc=MA-Taxes-on-Par-with-U.S.-Average-in-FY-2016.html

2Fully comparable nationwide, state-by-state data is only available going back to 1977.
See MassBudget, “Income Tax Cuts and the Budget Deficit in Massachusetts”, available at: http://massbudget.org/report_window.php?loc=tax_cuts_factsheet.html