While most parents welcoming new family members face challenging decisions about balancing caregiving responsibilities with their careers, mothers tend to bear the heavier load.1 For instance, women are more likely than men to take time out of the labor force to have children and work fewer hours to take care of them and other family members.2 This can impact the economic security of families especially since many families rely on mothers’ incomes. In over two-fifths of families with children in the U.S. (41.4 percent), mothers are the primary wage earners as either a single parent or as a co-primary wage earner, bringing home as much or more than their partner.3 Paid family and medical leave (PFML) provides workers with job protections, partial wage replacement, and flexibility to meet family responsibilities. Several states and most other countries have PFML policies that aim to help families, and ultimately the economy, by making it easier for working people to bond with a new child, attend to their own serious medical needs, or care for an ill family member.

In New England, a small percentage of workers – 13 percent – receive paid family leave through their employer, which lets them take care of new babies, newly-adopted children, or seriously ill family members.4 However, a few U.S. states have PFML programs that serve virtually all employers and employees. With the longest-standing and best-documented PFML program in the nation, California provides the best evidence on how paid leave programs affect working mothers. For instance, one research study shows that after the PFML law was implemented in California, mothers employed at least 20 weeks during pregnancy and mothers employed at some point during their pregnancy are 18 percent and 13 percent more likely, respectively, of returning to work within a year after birth compared to preprogram baselines (see below).5

While the first bar the bar shows the experience of women employed for least 20 weeks, the second bar broadens the sample to include mothers with any pre-birth employment. As for the latter, the study explains that these results shows a smaller probability of returning to work because fewer mothers would be eligible for leave than mothers would with more robust and consistent work histories.67

In addition to making it more likely for new mothers to return to the labor force, data indicate that PFML makes it more likely for new mothers to stay in the labor force. In the same study as discussed above, in California, before the law, mothers, with at least 20 weeks of work experience during pregnancy, worked about 39 weeks in the second year after a child’s birth. After the law came into effect, this increased to 46 weeks, an overall 7 week increase in that year.8 Mothers with any work experience are more likely to experience a 5 week growth in weeks worked in the second year after birth.9

The length of leave matters when increased employment is the preferred result. When parental leaves are too short or are too long, there can be negative maternal employment effects.10 Several studies indicate that maternity leave lasting a few months have the most positive impact on maternal employment.1112 For instance, a longitudinal study of European paid leave programs showed that paid parental leave of three months increased the percent of women employed by 3 to 4 percent when compared to corresponding aged men and older women.13

While those caregivers who take leave are out of the workforce in the short term, they are more likely to return to work and remain employed than those without access to PFML.14 For instance, research from European paid family leave programs finds that paid family leave insurance programs that provide a few months of paid parental leave can improve women’s labor force participation.15 Currently, many women in the U.S. have only a few weeks of paid maternity leave, if employer provided or provided through a state insurance program, or none at all.

Research shows, for instance, that in California, prior to implementation of its PFML law, mothers took around 3 weeks of paid family leave (particularly bonding leave).16 After the program was enacted, use of paid family leave increased to 6 or 7 weeks, on average, as shown below.17 This increase in leave taking makes it easier for working mothers to follow medical recommendations that all women undergo a comprehensive postpartum visit around the first 6 weeks after delivery in order to receive anticipatory guidance around returning to work, among other things.18

In addition to the obstacles that most women face in taking leave, the data suggest that Black women are often even less likely to be able to take adequate leave than White women. The California study found that before the PFML law Black women averaged just one week of maternity leave compared with 4 weeks taken by non-Hispanic White mothers.19 Several years after implementation, both groups averaged seven weeks of leave.

PFML and impact on low- and moderate-income mothers

The risk of financial hardship can be particularly acute on women, who are more likely to be primary caretakers,24 and whose growing economic contributions play an important role in their families’ economic stability.25 Overall, the percentage of working mothers who are primary wage earners or who earn as much as their partners has more than tripled since 1967.26 Even in recent years, this percentage has increased from 30.2 percent in 2007 to 36.5 percent in 2010.27


PFML and effects on the gender wage gap

The persistent wage differences by gender partly reflect the impact of motherhood on women’s careers. New mothers tend to have to drop from the labor force for periods of time to take care of their children, facing setbacks in their accumulated earnings. Setbacks can be even more substantial when there is no access to paid family leave policies. As explored above, access to paid family leave increases the likelihood that women return to and stay in the labor force after childbirth. It also helps new mothers maintain a level of wages that they would not have otherwise earned. For instance, new mothers in California saw a 24 percent increase in mean annual wages in the first year of their child’s life, and 23 percent during the second year of their child’s life, when comparing pre- and post-paid family leave law wage outcomes.28 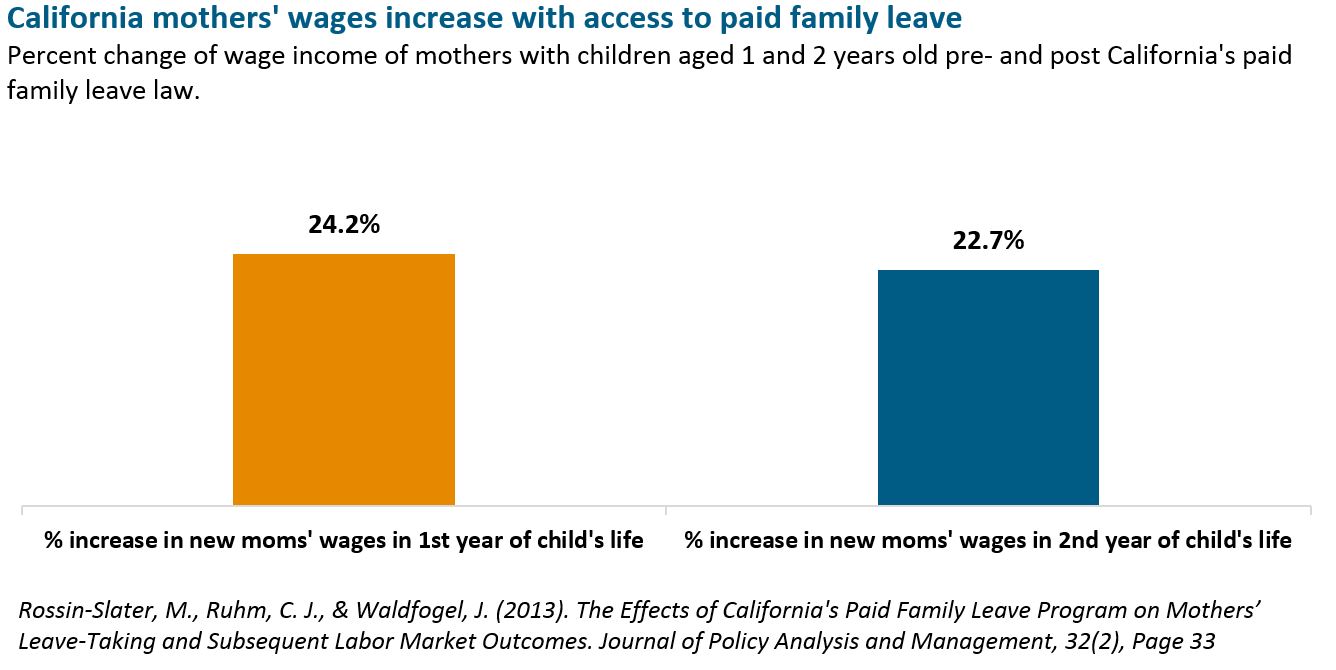 2Center for American Progress. (2015). Women of Color and the Gender Wage Gap. Page 2

6Workers’ earnings determine eligibility for the California paid family leave program. Specifically, eligibility requires that a worker earn at least $300 from which the state disability insurance deductions were withheld during their base period. For more on eligibility, see here: http://www.edd.ca.gov/Disability/Am_I_Eligible_for_PFL_Benefits.htm

11While the lack of adequate leave can negatively impact maternal employment, research finds that very long leaves can also have negative employment effects. For instance, a study of 21 European countries found that maternity leaves of 24 weeks or more can bring negative effects on mothers’ labor force participation. The evidence does not suggest any similar effect of long medical leaves. In fact, data on specific medical conditions shows longer leaves can be important. For example, a study of women with breast cancer found that they needed about 6 months of leave to deal with diagnosis. For more see: https://www.ncbi.nlm.nih.gov/pmc/articles/PMC1216317/

14Center for American Progress. (2012). The Effects of Paid Family and Medical Leave on Employment Stability and Economic Security. Page 21

20While there is somewhat more access to unpaid leave than paid leave, access to unpaid leave is also limited. For instance, the federal Family and Medical Leave Act (FMLA) provides up to 12 weeks of unpaid and job-protected leave to eligible workers to deal with serious health conditions or the birth, adoption, or foster care of a child. It requires that employees work close to full-time and for large employers (companies with 50 or more workers). As a result of these limitations, about 40 percent of the workforce is not covered by the FMLA. In Massachusetts, less than half of working parents in Massachusetts are both eligible for and could afford to take unpaid leave.