Improvements for our Children:
Fewer in Poverty, Almost All Insured


The share of children in Massachusetts growing up in poverty declined significantly in 2016, according to data released today by the U.S. Census Bureau. Since 2014 the child poverty rate has declined from 14.9 percent to 13.3 percent. This positive trend appears to reflect both the strength of our state economy and policy choices. Massachusetts has had strong job growth in recent years and has increased the minimum wage by two dollars an hour between 2014 and 2016. Health insurance rates for children in Massachusetts and nationally also both showed a statistically significant increase between 2015 and 2016.1

Even In Times of Growing Prosperity, More Than One in Eight Children Still Left Behind

Although our state and national economies have gained ground since the end of the most recent recession, many families and children have been left behind by the slow recovery. More than one in eight children in Massachusetts still lives in households in poverty.2 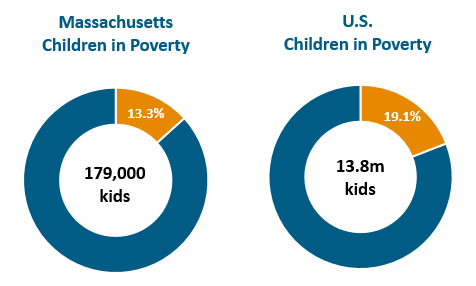 Data released today by the U.S. Census Bureau indicate that child poverty in Massachusetts has dropped between 2015 and 2016, with slightly more than 179,000 children, or 13.3 percent, below the poverty line (incomes of approximately $24,300 a year for a family of four.) This is a statistically significant drop from 14.5 percent in 2015. Nationally, child poverty dropped from 20.4 percent to 19.1 percent. This was also a statistically significant drop, but it still leaves close to 13.8 million children—almost one in five—below the poverty line across the country (see chart). 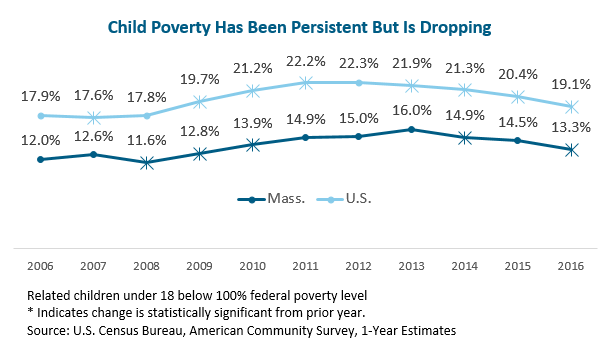 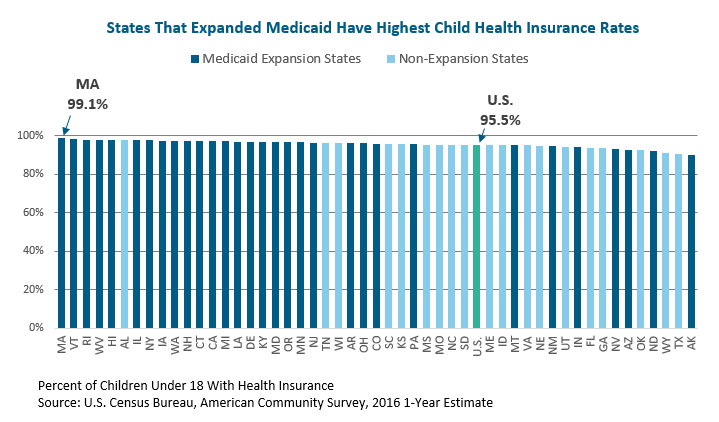 Nevertheless, health insurance alone does not guarantee access to health care. Health care that is truly accessible is affordable and available when needed. Health insurance helps make health care affordable, but there are other challenges to making sure health care is available for children when needed. A survey conducted by the Massachusetts Center for Health Information and Analysis found that approximately one of every six children was unable to get an appointment with a health provider when needed, and that as many as one-half to three-quarters used an emergency room because they were unable to get a needed appointment. Access to health care is also not evenly distributed across the state. Whereas there may be certain individual neighborhoods in eastern Massachusetts that have been designated as “medically underserved” for primary care, there are large geographic swaths of western Massachusetts that have that designation. Behavioral health care, oral health care, and other specialized services are also not easily accessible to children across all parts of the Commonwealth.5

1See discussion in MassBudget’s companion brief, MA Poverty Down, Incomes Up Substantially in 2016.

2Child poverty is not evenly distributed across the Commonwealth. For a discussion of the varying impacts of poverty, please see MassBudget’s Race to Equity: The State of Black Massachusetts, and see regularly-updated data at the Kids Count Data Center.

3The “Supplemental Poverty Measure” is a relatively new statistic that expands the definition of income to include certain non-cash benefits provided by specific programs, that takes into account certain necessary expenditures such as out of pocket medical costs, and that accounts for regional variations in the cost of living. Because of the way this measure is calculated, it is now possible to calculate the impact that these programs have on poverty. See U.S. Census Bureau, The Supplemental Poverty Measure: 2016. See also MassBudget’s brief, MA Poverty Down, Incomes up Substantially in 2016.