Having health insurance helps people afford necessary medical care, which helps them live healthier lives. Massachusetts continues to lead the nation in making sure all its residents have health insurance, but progress has stalled.

Further, some communities of color continue to encounter obstacles to getting health insurance and still see higher levels of uninsurance compared with the state overall. 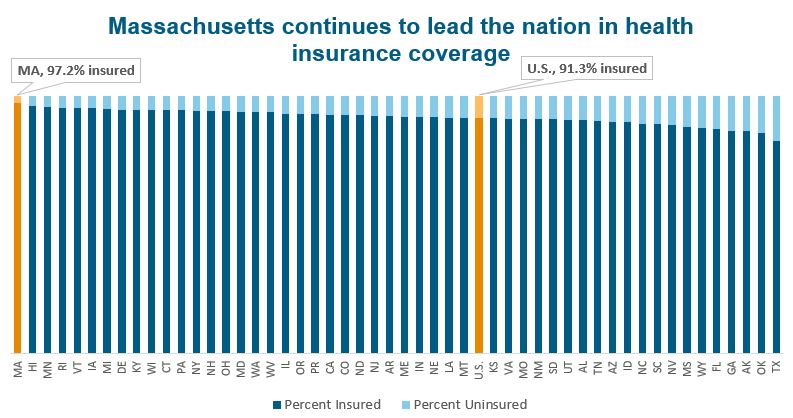 The national picture is similar. The number of uninsured Americans increased by close to 715,000 between 2016 and 2017, a statistically significant increase of 0.2 percent. It is notable that national health reform played a significant role in the marked increases in coverage since 2013 (as shown in the chart below). As in past years, states that adopted the Affordable Care Act’s (ACA’s) Medicaid expansion as of 2017 had much higher rates of people covered by health insurance than states that did not. The Medicaid expansion allows states to provide coverage to non-elderly adults with incomes up to 138 percent of the federal poverty level.

Researchers find that adults without health insurance tend to forgo medical care and have poorer health outcomes.1 A Tennessee study that examined the effects on more than 170,000 adults who lost eligibility to the state’s Medicaid program in 2005 found that those who lost health insurance coverage reported worse health and poor access to medical care.2 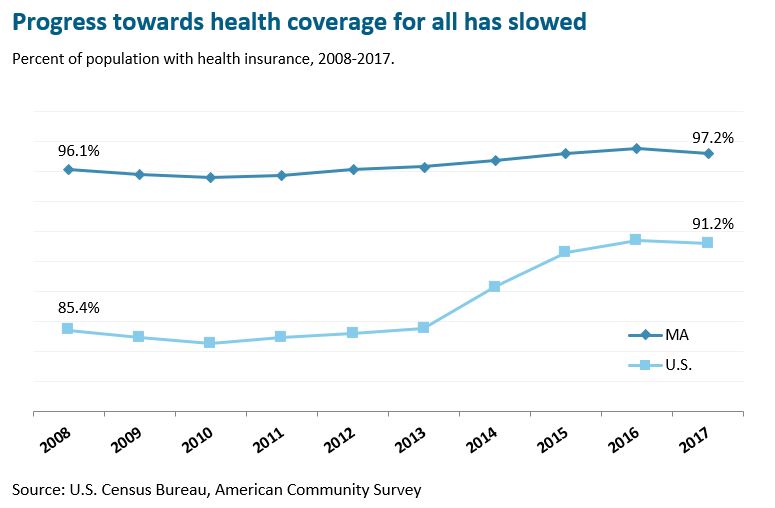 Similarly, the progress in ensuring all Massachusetts children are covered by health insurance stalled between 2016 and 2017 (as shown in the table below).

Massachusetts’ nation-leading coverage is thanks, in part, to publicly-funded health insurance. MassHealth (which includes both Medicaid and the Children’s Health Insurance Program) covered more than half the Commonwealth’s children in 2017. Read more in our report, Caring for Kids: Majority of Massachusetts Children Have Benefitted from MassHealth Programs. 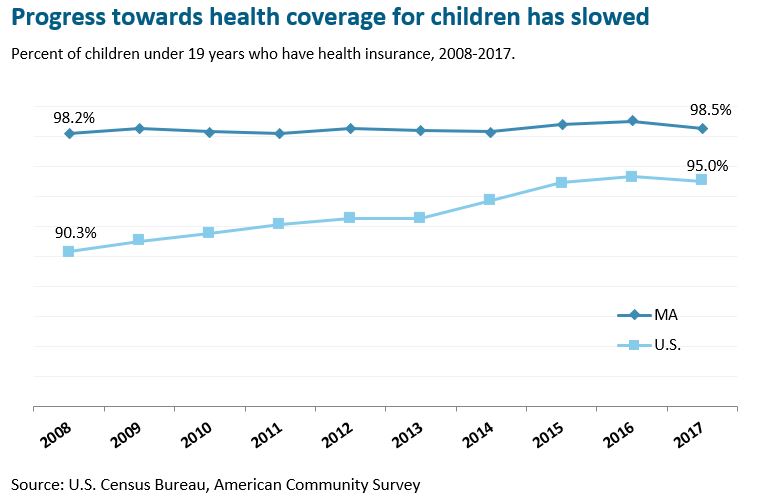 Looking at rates of coverage by race and ethnicity, a similar trend emerges — the percentage of people without insurance ticked up slightly among almost all groups in Massachusetts between 2016 and 2017.

Some groups, however, continue to face greater barriers to health insurance. Nationally, despite gains in health coverage under the ACA, people of color are still more likely to be eligible but unenrolled in certain types of publicly-subsidized health insurance.3 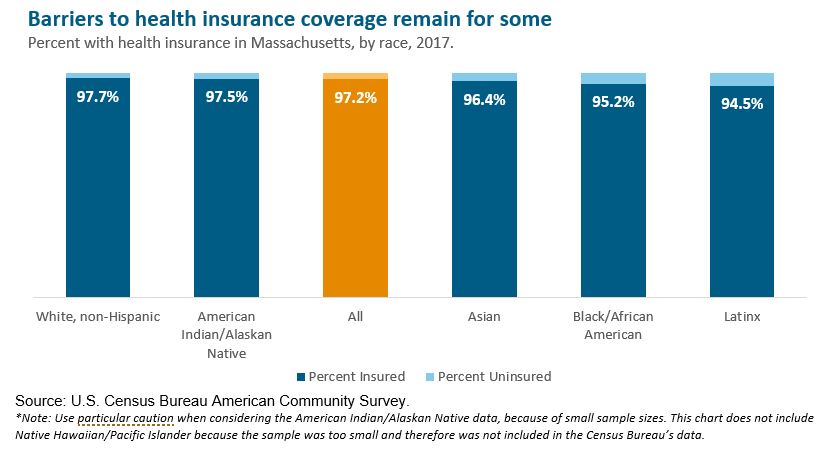 People who were born outside the U.S. or who lack citizenship also face barriers to health insurance coverage. A person’s immigration status or where they were born can affect their eligibility, understanding of their eligibility, or unease in revealing sensitive information.4

In Massachusetts, more than three times the share of those who were born outside the U.S. have no health insurance compared with those born in the U.S. — 6.7 percent compared with 2 percent. Among those who were born outside the U.S., those who were not naturalized U.S. citizens in 2017 had even higher rates of uninsurance — 11.4 percent. Foreign-born residents who are not naturalized U.S. citizens include permanent U.S. residents, and those with visas to work and study in the country.

Having an accurate picture of who in the Commonwealth has or lacks health coverage is just one essential piece to addressing the needs all people. Obtaining an accurate Census count is vital for this. Learn more about Massachusetts’ key sources of federal funding affected by these data in our report, WHY THE COUNT COUNTS: Major Sources of Federal Funding for Massachusetts Affected by Census Counts.

The American Community Survey (ACS) is the most useful national survey for comparing health insurance rates across the nation. The ACS is conducted on an ongoing basis, contacts over three million households each year and asks questions about a variety of demographic measures, including age, income, employment, health insurance coverage status and type, and racial characteristics. The Census Bureau began conducting the ACS in 2000, and added questions about health insurance coverage in 2008. Because of its large sample size the ACS provides reliable single year data on the state level, as well as other geographical units (e.g., counties) with populations over 65,000, making it a useful source of information when comparing state health insurance coverage rates. However, because health insurance questions have only been asked since 2008 (and the survey methodology was changed in 2009), the ACS data cannot currently be used to analyze longer-term historical trends in coverage.

The Current Population Survey (CPS) is an ongoing survey that focuses mostly on wages and employment, but also includes information about health care coverage. The CPS is a smaller survey than the ACS and in 2013 the CPS reduced its sample from 100,000 addresses across the country to 68,000. The CPS was re-designed in 2013 to improve the reliability of the survey in providing information about health insurance coverage and in order to provide baseline information about health care coverage prior to the implementation of the Affordable Care Act in 2014. However, the data are not comparable to data from prior years. Accordingly, Census Bureau this year released the ACS health insurance data alongside the CPS data.

We present disaggregated data to provide an initial understanding of how policies can affect the lives of different communities in Massachusetts. It is important to note that the broad categories — such as Black, Latinx, or Asian American — used in data samples cannot fully capture the nuances and variations within communities.