The national school meals program helps ensure that low-income kids get healthy lunch and breakfast while at school.

Historically, at the beginning of every school year, families filled out an application declaring their household income. Kids in families below 130 percent of the federal poverty level received free meals. Those between 130 and 185 percent received reduced-price meals. Schools were reimbursed by the federal government based on detailed records of which kids (free, reduced, or paid) were eating meals on a daily basis. (For more info: MassBudget’s Children’s Budget pages for School Lunch and School Breakfast)

What does the school meal program have to do with school funding formulas?

How is the process of enrollment for school meals changing with Direct Certification?

Recognizing that many low-income families are already enrolled in other public programs that use similar income criteria--e.g. food stamps and MassHealth (or Medicaid)--districts have moved towards directly enrolling kids for free meals if their families are already enrolled in one of these other programs. Called “Direct Certification” this process automatically enrolls many eligible kids for free meals. It is intended to reduce the administrative burden on families and school districts of filling out and collecting income forms.

What is the Community Eligibility Provision for offering universal free meals in low-income schools?

The national school meals program is now building on Direct Certification by allowing schools or districts with at least 40 percent of their kids directly certified for school meals the option to provide free meals to all students every day. Called “Community Eligibility” this program can increase revenue for participating schools and dramatically reduce daily record-keeping in school cafeterias. With all students participating, Community Eligibility can also help reduce the stigma of being identified by peers as low-income. The program provides more children with better access to free meals – and we know that children learn better when they are not hungry (More info: Food Insecurity Affects School Children’s Academic Performance, Weight Gain, and Social Skills).  During the 2013-2014 school year Boston was the first school district to pilot Community Eligibility in Massachusetts. Twenty-two additional districts are participating this school year. (More info: Community Eligibility: Making High-Poverty Schools Hunger Free)

For districts that adopt Community Eligibility, Direct Certification eliminates the need to collect school meal applications from every family each year.

What’s happening with districts that do not adopt Community Eligibility?

Districts that do not adopt Community Eligibility still directly certify some students for school meals based on the data matching process described above. They then send out the traditional free and reduced price meal applications to all other families.

How are changes to the school meal program affecting school funding formulas?

Since the income data gathered by the traditional free and reduced price meal forms has historically been used to inform many school funding programs, and since Community Eligibility districts no longer collect these forms from every family every year, the state needs to determine a new approach for counting low-income students in these districts. For instance, the state’s Chapter 70 education funding formula—the largest source of school funding in low-income districts—uses these headcounts as a key variable in determining state support.

Direct Certification rates tend to be lower for several reasons, including that the two processes use slightly different eligibility standards; the data matching process is challenging to get 100% correct, especially when reconciling partial matches (e.g. reconciling nickname variations, different date formatting, spelling mistakes, etc.); and high-poverty districts that have at least 62.5 percent Direct Certification rates have no need to identify additional eligible kids through data-matching, since they will already receive 100 percent reimbursement from the federal government for all of their kids (More info, see p. 8: Community Eligibility: Making High-Poverty Schools Hunger Free).

What are we doing about this in Massachusetts?

Over the past few years, the Department of Elementary and Secondary Education (DESE) has supported districts in rolling out Direct Certification and Community Eligibility. Additionally, DESE is developing ideas for adjusting school funding programs (e.g. Chapter 70) to account for this new data collection process in Community Eligibility districts.

The new measure essentially uses a Direct Certification approach, automatically counting students as “economically disadvantaged” if they are in one or more of the following programs: the Supplemental Nutrition Assistance Program (food stamps), Transitional Assistance for Families with Dependent Children (TAFDC), MassHealth, or the state foster care program. This definition does not include other youth that are categorically eligible under federal rules, including those in families participating in Head Start as well as migrant and homeless youth.

The new “economically disadvantaged” measure generates a lower statewide estimate of low-income students than does the current “low-income” measure—26 percent versus 38 percent. Further, the specific size of this gap varies considerably by district. Communities with more immigrants, for instance, appear likely to have larger gaps between these two measures since immigrants enroll in public programs at lower rates (and some are ineligible altogether). Also causing gaps may be local variations in program participation and variations in school district record keeping and administrative capacity to reconcile partial data matches. 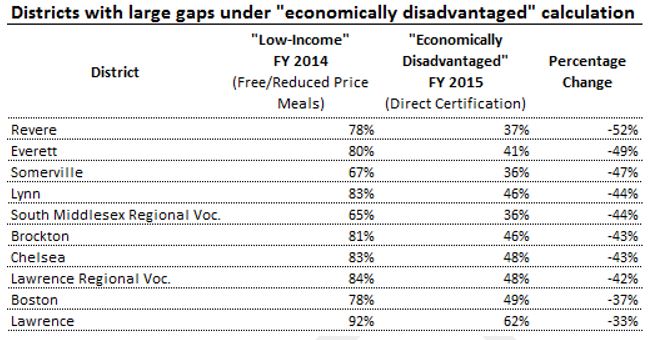 Recognizing that the total number of kids newly identified as “economically disadvantaged” is lower than the number identified as “low-income” under the traditional free and reduced meal application system, DESE has proposed increasing the Foundation Budget rate associated with these kids. The goal is to make this adjustment in a way that is cost-neutral overall, with districts receiving roughly the same amount of Chapter 70 funding as they would have under the old approach. (More info: A New Metric for K-12 Education Data).

It is unclear how this would work in practice, however, since the gap between low-income student counts under the new and old methods varies widely across districts (see examples in table above). Increasing the Foundation Budget rate for all districts uniformly would create winners and losers, with some districts getting more aid than they historically have received and others receiving less.

How might we also improve the Direct Certification process?

There will likely always be some gap between the proposed “economically disadvantaged” method and those identified as “low-income” under the old system. Nonetheless, the gap can be closed significantly by implementing a high-quality Direct Certification system that both enrolls all eligible families in the appropriate public programs and effectively matches these families with school enrollment records.

Specific improvements to Direct Certification could include:

What are some other options for adjusting school funding mechanisms?

Since Community Eligibility became an option nationwide only this year, many other states are also now dealing with similar decisions. As a stopgap, many are applying year-old free and reduced meal percentages to current enrollment totals for Community Eligibility districts. DESE is doing a version of this for FY 2016 and could consider a slightly extended phase-in as the new system is refined and built. Income status in communities can vary year to year, however, so approaches like these will necessarily be temporary.

Direct Certification and Community Eligibility represent meaningful improvements for students in Massachusetts, helping ensure that kids eat healthy breakfasts and lunches while in school - and we know that children learn better when they are not hungry. These new programs have led to some transition challenges for school funding mechanisms, but options exist for preserving these positive improvements while limiting or avoiding technical problems.