Motivated by growing concerns that Massachusetts schools were not serving all students well, especially those in high-poverty districts, the state passed the landmark Massachusetts Education Reform Act (or Ed Reform) on June 18, 1993. Ed Reform made significant changes to school standards and accountability, structure, governance, employment policies, and the way schools are financed, which is the focus of this paper. In particular, it evaluates what has worked, what has changed, and what might be altered moving forward.

School finance is more adequate and equitable, but progress has eroded.

Ed Reform ushered in major changes to the Chapter 70 education formula, making the distribution of state aid more adequate and more equitable by:

For more detail on how the formula works, please see MassBudget's Demystifying the Chapter 70 Formula.

As part of a grand bargain to couple new policy reforms with greater state investment, Ed Reform included an ambitious commitment to increase education aid to local districts. The timing of this commitment coincided nicely with strong economic growth during the 1990's, supporting a doubling of state Chapter 70 aid from FY 1993 to FY 2002, as seen in the graph on the left.

Inflation adjusted, FY13 $, using the Implicit Price Deflator for State and Local Government (IPD-SLG), the inflation factor identified in the Chapter 70 law. Includes ARRA funding in FY09-11. IPD-SLG generally captures higher cost growth than does the CPI, which measures the cost of things purchased by a broader range of consumers. Using IPD-SLG for the inflation adjustments above, therefore, ends up showing a deeper cut since FY 2002 than an adjustment using CPI. To adjust funding using various inflation measures, please go to MassBudget's Budget Browser.

Funding progress did not continue through the 2000's, however, with Chapter 70 aid cut by about $600 million since FY 2002. The 2005 State Supreme Court decision in Hancock v. Commissioner of Education made clear its expectation that funding was to continue increasing in future years "as the Commonwealth's finances improve." The Hancock case was filed in 1999, charging that the state had not fulfilled its mandate to provide adequate education to all students as mandated in 1993's landmark McDuffy school finance case. While the court in Hancock found that the Legislature had made reasonable progress during the 1990s, it stressed in its written opinion that it anticipated that the process of education reform in Massachusetts to be ongoing and that state revenue support would continue to increase. Specifically, Chief Justice Marshall wrote:

[The legislative and executive branches] are proceeding purposefully to implement a plan to educate all public school children in the Commonwealth, and the judge did not find otherwise. They have committed resources to carry out their plan, have done so in fiscally troubled times, and show every indication that they will continue to increase such resources as the Commonwealth's finances improve. (Emphasis added. Hancock v. Commissioner of Education, Feb. 15, 2005, pp. 434-435. Full decision available HERE.)

Unfortunately, rather than improving during the second decade of Ed Reform, the state's fiscal situation deteriorated. Three factors converged to constrain the state budget significantly during most of the 2000's: 1) the annual loss of about $3 billion in revenue resulting from state-level income tax cuts of 1998-2002; 2) the lingering effects of two recessions, one in the early 2000's and, more recently, the Great Recession beginning in late 2007; and 3) rising health care costs nationwide putting added pressure on state and local budgets. With less revenue to support state programs, funding progress of the 1990's has been partially reversed since FY 2002, as seen in the right-hand graph above.

For more information on the budget effects of the tax cuts of 1998-2002, please see MassBudget's Income Tax Cuts and the Budget Deficit in Massachusetts.

The Foundation Budget has not been updated to reflect current costs.

While Ed Reform established a new funding mechanism in 1993, the state has made few mid-course adjustments during the intervening twenty years, ultimately hampering many districts' ability to make direct classroom investments outlined in the original foundation budget. In particular, the state has not fully accounted for rising health care and special education costs.

By FY 2010, the statewide foundation budget understated actual health care and special education costs by roughly $2.1 billion annually. Forced to meet these rising costs, all but the wealthiest districts in Massachusetts have been spending below foundation budget assumptions on core classroom components, especially on the hiring of regular education teachers. With average teacher salary growth roughly in line with inflation, it is most likely that this reduced spending led districts to hire fewer classroom teachers, in turn resulting in larger class sizes and teachers carrying larger workloads.

The graph below breaks all Massachusetts districts into five wealth quintiles, with the least wealthy districts on the left (Lowest 20%). 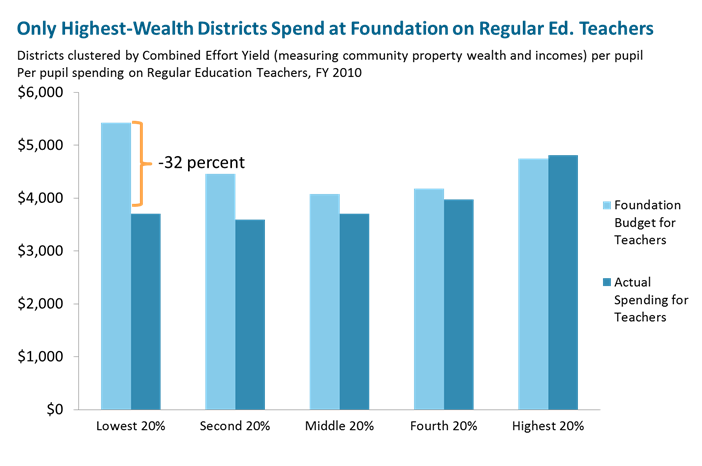 As seen above, only the wealthiest twenty percent of districts are spending at foundation budget assumptions for regular education teachers. All other wealth groups, by contrast, are spending below what the state deemed in 1993 to be an adequate minimum spending level, with the least-wealthy districts spending roughly one-third below.

The wage-education link has grown stronger over time.

Part of the original motivation behind Ed Reform was a sense that the nation was rapidly moving towards a knowledge-based economy with a growing premium placed on the skills of a state's workforce. This movement has continued over the past twenty years, underscoring the importance of investing in the education.

The two graphs below show the relationship between median hourly wages and the percent of a state's workforce with at least a bachelor's degree. While back in 1979 states with more highly-educated workforces tended to have somewhat higher wages, the relationship was pretty weak, with many outliers. States like Michigan and Ohio, for instance, were among the highest-wage states, even though they had lower levels of education, largely because these states had healthy manufacturing sectors with jobs that paid relatively well for people with only a high school degree.

Largely by 1993, and even more so today, there was a very strong relationship between median wages and the education of a state's workforce. State leaders were right to identify this changing dynamic back in the early 1990's, and it appears that education will continue to play a central role in our state's ability to generate economic growth that raises wages and incomes.

The foundation budget should be reexamined in light of all that has changed.

Education has changed dramatically since passage of Ed Reform, both in terms of what it costs today to fund all elements of the original foundation budget (e.g. health insurance and special education) and, more broadly, in terms of what we expect our schools to accomplish. While school funding is more equitable than it was pre-Ed Reform, the state's definition of spending adequacy, the foundation budget, may be well out of date.

One likely pathway forward is conducting a comprehensive reevaluation of the state's foundation budget. The foundation budget was constructed based on a set of assumptions about what should be included in an adequately resourced model school program in the early 1990's. A fresh reevaluation would analyze these assumptions against estimates of what it would cost to provide a quality baseline education given current thinking about how best to design public schools today.

Specifically, these reform discussions should be informed by the best current research into issues such as: