With the national economy still struggling to recover from the Great Recession, for the sixth year in a row Massachusetts starts the budget process facing a substantial gap between ongoing revenue and the cost of maintaining current services and commitments. As the FY 2015 Budget process begins, that gap now stands at approximately $514 million.

While the weakness of the national economy is the major short term cause of the state's fiscal difficulties, two longer term causes remain at the root of our state's fiscal difficulties: a series of expensive tax cuts adopted between 1998 and 2002 and many years over which health care costs grew faster than the overall economy. While health care cost growth has moderated in recent years, keeping that growth in line with growth in the overall economy will remain a significant challenge for the Commonwealth in the years ahead. The tax cuts of 1998-2002 continue to cost the state over $3 billion a year—and are at the root of the long term budget cuts the state has enacted in local aid, early education and higher education, public health, and throughout much of the rest of state government. 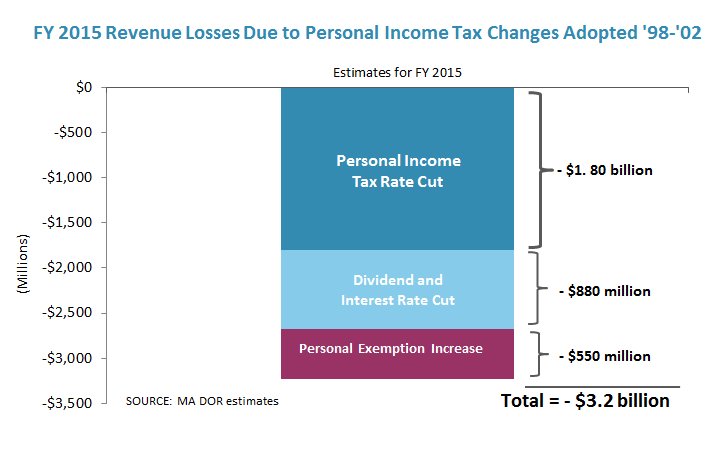 The Use of Temporary Revenue in FY 2014

The first step in calculating the preliminary budget gap for next year is determining how much temporary revenue is being used to balance the budget this year. When reserve funds and other temporary revenues are used to pay for ongoing costs in one year that results in a gap between ongoing costs and ongoing revenue. The FY 2014 budget relies on $752 million in temporary revenue. This includes $361 million withdrawn from the state stabilization fund, as well as revenue from gaming licenses, the sale of state assets, surpluses from FY 2013 used to support FY 2104 spending, and other sources. The state now estimates, however, that FY 2014 tax revenue will exceed expectations by $403 million. The state usually also finds that costs in some areas exceed the amount budgeted. For example, when the number of homeless families in need of emergency shelter exceeds the capacity that the state budgeted for, additional appropriations are made during the year to cover such costs. This preview assumes $200 million in such additional costs, a little more than half of one percent of the state budget. As a result the $403 million increase in the revenue estimate would reduce the reliance on temporary revenue in FY 2014 by $203 to $549 million.

The Joint Revenue Estimate agreed to by the House, Senate, and Governor projects FY 2015 tax revenue at $24.337 billion: growth of $1.539 billion above the original FY 2014 tax revenue estimate of $22.797 billion. This estimate assumes that FY 2014 tax revenue will exceed initial projections by $403 million and then will grow another 4.9%. That 4.9% increase represents $1.137 billion. This estimate includes the costs of tax cuts that are being phased in, including a cut in the income tax rate to 5.2 percent.

The state also receives revenue from the federal government, from fees, from the state lottery, and from other sources. There are not publically available projections of the likely increases in these revenue sources. This preview assumes that they will grow at the rate of inflation: 2%. That 2% growth on the $6.3 billion in these revenue sources produces $126 million in new revenue.

This calculation does not include federal revenue associated with our state Medicaid program. That program reimburses the state at roughly 50% of our costs—and more for some parts of the Medicaid program such as expansions related the Affordable Care Act. To simplify calculations, this Preview excludes the share of Medicaid costs that are reimbursed by the federal government from both the spending and revenue sides of the budget. Because they are ultimately paid by the federal rather than state government they can be treated separately.

Adding together available new tax revenue and other new revenue yields a total of $1.141 billion.

To project cost growth accurately requires a careful examination of caseload changes, the costs of specific goods and services the government buys, and other factors. This process of developing a "maintenance budget" is done be the state's Office of Administration and Finance. While in a number of other states a maintenance budget is made public, in Massachusetts it is not.

Therefore, this preview uses those publically available sources that exist and provides estimates in other areas.

When the House, Senate, and Governor project revenue for the next fiscal year, they also determine spending levels for a number of parts of the budget that are paid directly with earmarked tax revenue that is not part of the normal appropriations process. These items include: Pensions; the MBTA; and Funding for School Building.

While health care cost growth has slowed in recent years, it still exceeds the rate of inflation. In FY 2014 the state will spend approximately $6.8 billion on the Medicaid program (not including the share reimbursed by the federal government) and $1.3 billion on health care for state employees. If these grow by 3.6 percent, that will increase their cost $291 million.

We use the 3.6 percent estimate because that is the state's target for overall health cost growth across the economy. State costs are likely to grow more than that, largely because the state is expected to cover more people next year than this year. On the other side of the ledger, the state is expected to receive significant additional federal funding in connection with the federal Affordable Care Act. As the costs for increased enrollment and the new revenues are uncertain—and, to some degree will balance each other—we do not make specific assumptions on those items for this preview.

There are several other areas where existing law has committed new resources to particular areas in FY 2015.

Effects of Inflation on the Rest of the Budget

When we net off from the total FY 2014 Budget the items above the remaining amount is approximately $18.4 billion.

If we assume that, on average, costs for the remaining portions of the budget will grow at the projected rate of inflation (2 percent) then we will see $368 million in new costs on FY 2015.

Together costs are projected to grow by approximately $1.1 billion. This is about $35 million less than the increase in revenue. Unfortunately, that will not lead to a budget surplus because the FY 2014 budget relies on $549 million in temporary revenue. This $35 million will close a portion of that gap. But the state still faces a preliminary gap estimated at $514 million. If general costs or health care costs grow faster than assumed in this preview, the gap would be larger. If costs grow at a lower rate than projected the gap would be smaller.

Overall, due to strong projected revenue growth the preliminary gap this year is smaller than in recent years. But we still face difficult challenges. Once again the administration and legislature will need to find ways to reduce costs, increase revenues, or use reserve funds to balance the budget. 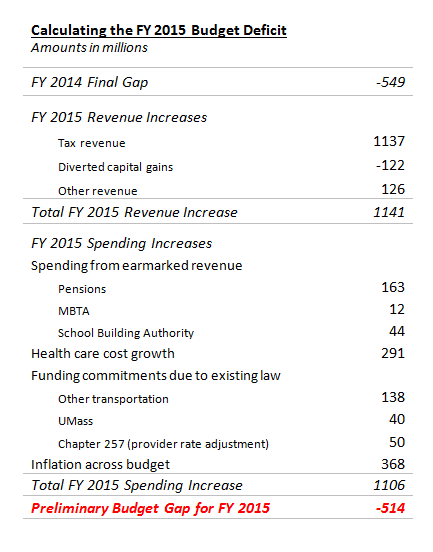