Public Higher Education in Massachusetts and the Governor's FY 2014 Budget

Higher education is vital to economic prosperity, and it serves as the critical final step for students advancing through our state education system. The skills of a state workforce have grown increasingly important over the last thirty years, with increasing educational attainment correlated strongly with higher wages (see The Education/Wage Link section of Massachusetts Budget and Policy Center report on the State of Working Massachusetts). Furthermore, a recent study from Georgetown University found that 62 percent of jobs will require some college education in 2018 compared to 28 percent in 1973.1

However, despite the evidence that college and higher education are vital to our future, Massachusetts has eliminated hundreds of millions of dollars in public higher education investments in recent years. When state investment falls behind the needs of the university and community college systems, students in those universities are forced to pay higher tuition and fees. With rising costs, the amount of money a student must take out in loans rises.

Public higher education has seen dramatic cuts over the past decade. State spending on higher education, including funding for the UMass system, Community Colleges and State Universities, declined 31 percent from FY 2001 to FY 2013 (adjusted for inflation). While state spending has gone down, the funding needs of these institutions did not. To make up for this shortfall, these systems consistently raised the price of student tuition and fees. This resulted in increases whereby state universities and UMass doubled student costs, while increases at community colleges were close behind.2 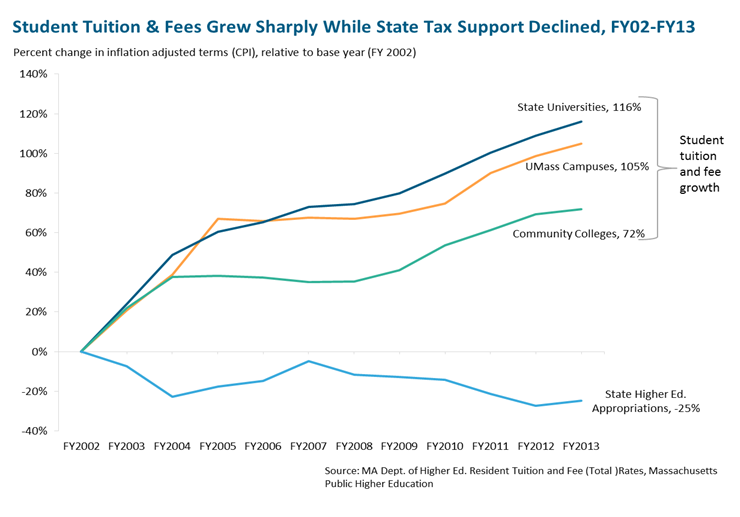 The Commonwealth is far from alone in making dramatic reductions to public higher education. Recently, the Center for Budget and Policy Priorities (CBPP) released a report on the state of public higher education nationwide, finding that since the onset of the Great Recession in late 2008, states have cut per student support by an average of 28 percent. In fact, only two states, North Dakota and Wyoming, increased higher education investment.

Higher education cost increases are a barrier to college access, especially for low income students. The CBPP report found that the impact of these cuts is felt directly in families' pocketbooks as they must either pay or borrow more to obtain the services that had previously been supported more heavily by state funds. For low income students, the ability to pay for institutions of higher learning can be restricted, leading many of these students to incur greater debt to pay for school. Even for those who are able to begin college, their ability to stay is impeded when compared to higher income students. Studies have found that excessive higher education debt leads to lower graduation rates among low income students.3

The Governor's Fiscal Year (FY) 2014 budget makes some progress in reversing many of the cuts accumulated over the last decade. The Governor's proposed $185.2 million increase, $152.5 million of which is supported through new money generated by his tax reform proposal, would help reverse a portion of the $454.3 million cut from higher education between FY 2001 and FY 2013.

By FY 2017, the Governor estimates that under his proposal total education spending would be $1 billion more than current FY 2013 levels with about one-third of this going to higher education. For more information on the Governor's revenue proposal, please see Tax Policy Proposals in the Governor's FY 2014 Budget.

Specifically, for FY 2014 the Governor proposes:

Most state funding for public higher education is paid directly to universities and community colleges. Specifically, the Governor proposes funding:

The chart below shows historic state support for higher education compared to current levels and the Governor's FY 2014 proposal. The Governor's proposal would bring higher education funding back close to pre-recession levels, but it would still fall short of FY 2001 levels, where spending was almost $300 million higher.

Recent changes to federal immigration enforcement have resulted in some formerly undocumented youth and young adults, including many in Massachusetts, being able to temporarily remain in the U.S. and work without fear of deportation. Many persons who are in the United States without permanent legal status are here because they were brought to this country as children. These individuals were not responsible for their actions and most only know the United States to be their home. Because of this, the Obama Administration, using its executive authority on immigration enforcement, announced a new policy in summer of 2012, by which they would grant certain individuals "Deferred Action for Childhood Arrivals" (DACA), a status which allows grantees to stay in the United States for two years and to gain work authorization, and which may be renewable at the end of the two-year period.6

After this federal policy change was announced, Governor Patrick announced in November of 2012 that Massachusetts residents granted DACA would now, like most other documented immigrants, qualify to pay in-state tuition at public institutions under our existing Board of Higher Education policy, as they are now able to produce one of the documents accepted by our public higher education system as evidence of their immigration status.7 This federal policy change has the potential to expand educational access for a group of state residents unable to afford out-of-state tuition. These differences can be substantial, since tuition and fees have increased dramatically, the average tuition and fees for a Massachusetts resident at UMass campus is $13,230 while an out of state student pays $26,645.8

Who is eligible for DACA?

To be eligible for DACA a person:9

What effect will this have on enrollment?

DACA-eligible students will still compete for admissions on the merits of their scholarship just as any other in-state student does. A student must still meet the residency expectations required of all other Massachusetts residents in order to gain in-state status. This includes living in Massachusetts for one full year prior to enrolling in college or being the dependent of a person who has resided in Massachusetts for the preceding year.

DACA grantees-eligible students, like all other documented immigrants, will still compete for admissions on the merits of their scholarship just as any other in-state student does. A student must still meet the residency expectations required of all other Massachusetts residents in order to gain in-state status. This includes living in Massachusetts for one full year prior to enrolling in college or being the dependent of a person who has resided in Massachusetts for the preceding year.

It is also important to note that many undocumented youth brought here by their parents do not meet the requirements listed above to apply for DACA or any other immigration status, and so remain ineligible to pay in-state tuition rates at our public higher education institutions.

2 Because tuition and fee data is only available going back to FY 2002, the chart below does not capture all of the spending cuts in higher education since FY 2001. For that reason, the cut number included in the chart—25 percent—differs from the 31 percent headline finding.

4 Starting in FY 2012, all campuses of public higher education began retaining tuition payments from out-of-state students, rather than remitting that revenue back to the state, so MassBudget adjusts upwards the campus allocations by these projected amounts so that one can compare reasonably the levels or resources available at an individual campus to previous years when this tuition was remitted to the state.