The State of Working Massachusetts 2014

For the majority of working people, hourly wages and yearly incomes share a close link; hourly wages are the principal source of their income. Unfortunately, at both the national and state levels, wage growth for most workers has been disappointing for more than 30 years (see chart below). Focusing on more recent trends, during the Great Recession and the subsequent recovery (2008-2014), the story is even worse: wages actually have declined slightly for all wage earning groups. While Massachusetts workers have fared better than US workers as a whole, poor wage growth has been a defining characteristic of our economy. 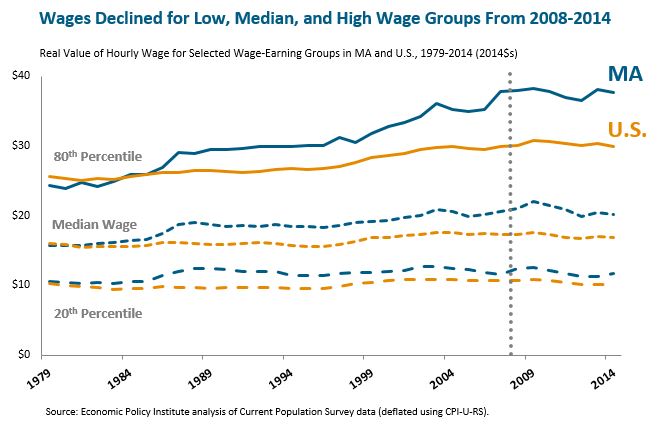 Not surprisingly, the wage stagnation of the last three decades has translated into similarly poor income growth for most Massachusetts households (see chart, below). Low income households have suffered actual income declines since the late 1970s. Insufficient incomes create real and substantial problems for many workers and their families, negatively impacting their quality of life, limiting their own economic opportunities and the opportunities they can provide for their children. 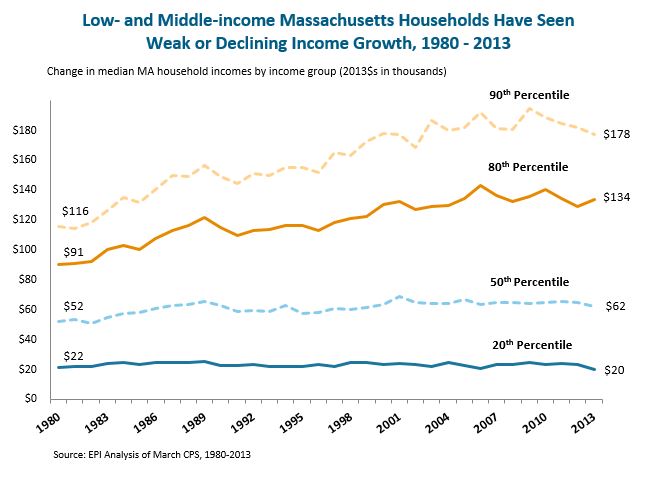 The trend of recent decades - where the vast majority of the benefits of economic growth have gone to the highest income households - has not been a permanent feature of the American economy. In fact, in the three decades following WWII, strong overall income growth was matched with – and in part, likely was the product of – far more equitable income growth.4 During this post-war period, high, middle and lower income households all enjoyed significant annual income gains (see chart below). 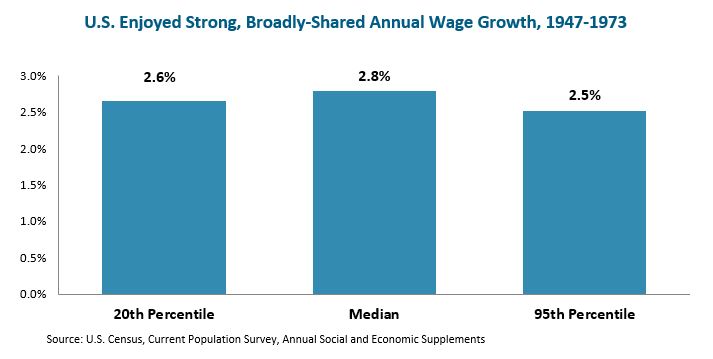 During this post-WWII period, notably, median wages also grew in lockstep with the overall growth in productivity (see chart, below). As workers delivered more and better products during each hour of their work day, they shared in the profits generated through their work. In the 1970s, however, this pattern began to change: productivity continued its steady rise, but wages for average workers stagnated (see chart, below). 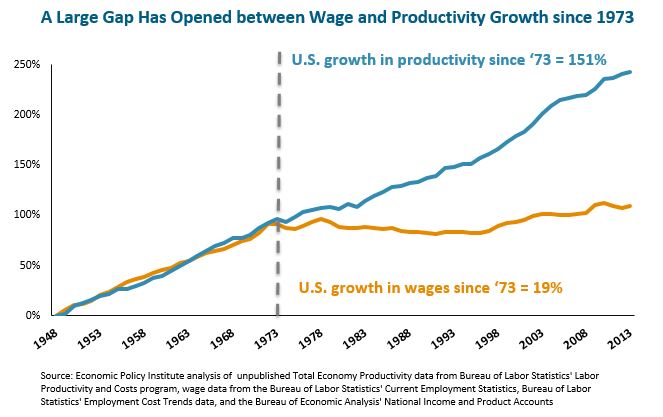 Reconnecting wage growth to gains in productivity – in other words, making sure that when productivity increases, the new value being created leads to higher wages as well as profits – is a core challenge for today’s policy makers, at both the federal and state levels.  Massachusetts already has taken modest but important steps toward achieving this goal. By adopting a state minimum wage of $11/hour by 2017 (the highest statewide minimum in the nation, if other states do not enact higher rates by then) and requiring most employers to provide earned paid sick time, the Commonwealth is building a better wage and income floor under low wage workers.

Massachusetts also has the highest median wage in the nation (see chart, below) - a fact directly connected to the high levels of education of many Massachusetts workers. (To read more about the connection between education and wages, see the Education and the Economy section of this report.) 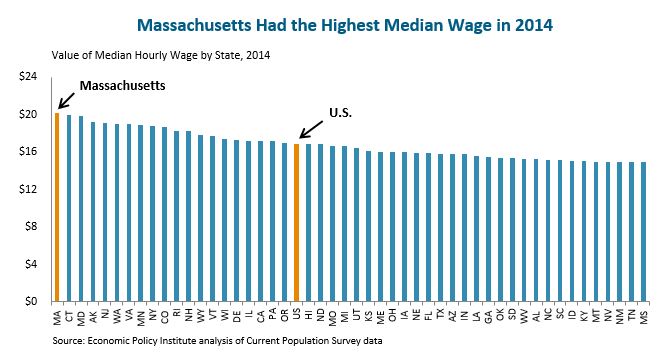 Nevertheless, poor wage growth and low incomes remain a deeply problematic reality for too many Massachusetts workers and their families. By reconnecting workers’ wages to the ever-growing productive capacity of our economy, however, we can move ourselves toward a future of broadly shared prosperity. Indeed, if economic growth over the past three decades had translated into proportionate income growth for low, middle, and high income households – rather than disproportionally benefitting the highest income households – then low and middle income families today would have real incomes $10,000 to $15,000 a year higher, on average, than is currently the case  (see chart, below). For many low and moderate income families, this amount of additional annual income could transform their day-to-day lives and their possibilities for the future. 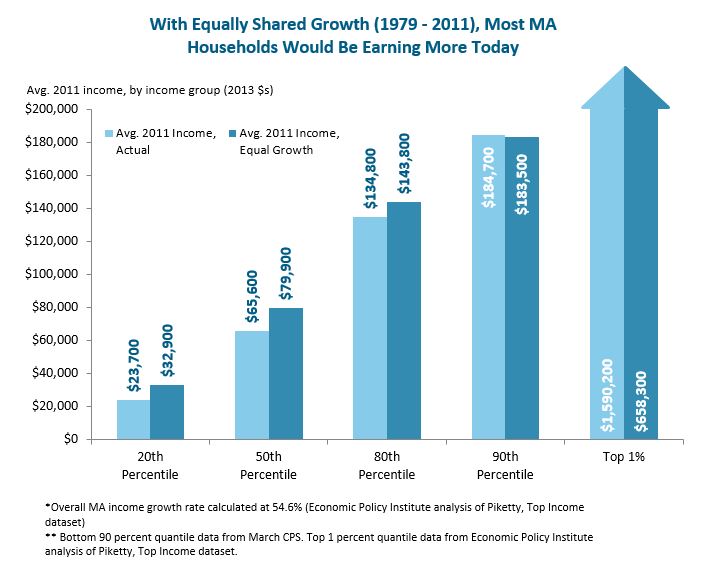 It will not be good for Massachusetts working families if the next thirty years look like the last thirty. There are, however, some hopeful signs. An improving national labor market, with falling unemployment and more job opportunities – which we’ve seen indications of here in Massachusetts over the last few quarters (see the Jobs & Employment section of this report) - can help eventually to push up wages and incomes. Indeed, tighter nationwide labor markets are critical to creating the conditions under which workers can demand and receive a more reasonable slice of the economic pie. But Massachusetts cannot simply sit back and wait for workers’ economic conditions to improve on their own. Policy choices have played a major role in producing the wage and income stagnation that has characterized the last three decades. Federal and state policy choices will need to be a part of the solution.